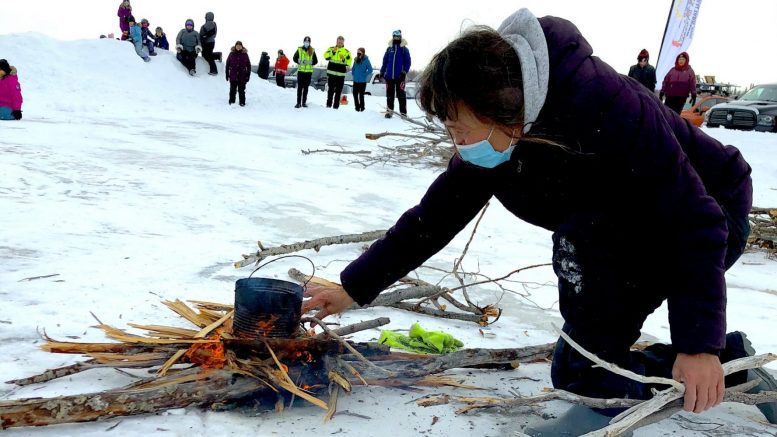 Melba Mitchell, participating in the traditional tea-boiling event, as part of the 2021 Muskrat Jamboree . (Photo courtesy of the Inuvik Muskrat Committee)

The Town of Inuvik kicked off its 63rd annual spring celebration over the weekend, but due to the pandemic, only a small portion of the community could attend in person.

Dr. Kami Kandola, chief public health officer (CPHO) of the NWT, allowed 50 residents in a town of roughly 3,000 to attend. 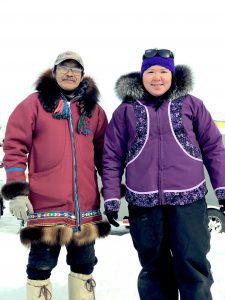 Georgie Greenland and Jamie Day at the Mackenzie river-site.
(Photo courtesy of the Inuvik Muskrat Committee)

This brought people online from all over the country, to participate and interact with each other during the notorious Muskrat Jamboree.

The event is a culturally-rich four-day experience to celebrate the end of winter and get an “authentic glimpse of life in Canada’s Western Arctic,” as posted on the town’s official website.

Dennis Allen has participated in the events since he was a little boy, but after moving away he had to experience them through a computer screen

“It’s better than nothing,” he says.

Allen is grateful for the opportunity to experience the events at all as he now watches from the comforts of his Alberta home.

“It was kinda fun,” he says, “we got to know people, talking back and forth on Facebook.”

He says residents from outside of the territory “really missed the talent shows and the music and the dancing.”

Gerry Kisoun is a long-time volunteer and recognized Elder in the community,not to mention, Allen’s brother. 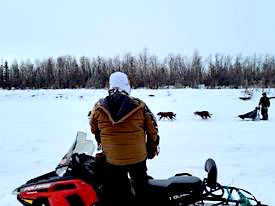 Kisoun is commonly known in the community as an “old dog ” for his many years serving the event.

He equates spring to muskrat season, as he remembers the trappers coming back around Easter, signalling the end of one season and the start of another.

“That’s the reason for the Muskrat Jamboree,” he explains.

“Spring is the time of year when people would come in from the Delta,” he says, “it’s a time to start trading their skins for some more supplies.”

Both Kisoun and Allen described a time, decades ago, when their ancestors would patiently wait for spring break up to be reunited with their communities again.

This time, the season isn’t the only thing holding back residents and communities alike from coming together.

Due to COVID-19, some changes to the traditional event schedule had to be made and many residents would have to adapt to an online setting.

No opening feast, ceremony or any indoor activities were allowed, and residents were reminded to remain 5 muskrats apart (6- feet).

Regardless of the change.” We had a great turnout,” says Kisoun.

Greta Sittichinli is one of the main organizers for the jamboree and has been volunteering for over 20 years.

This amount of online attention was something organizers were not expecting.

In the hopes of getting more residents involved, the Town of Inuvik deemed Monday, April 12, a civic holiday.

“I hope our modified festivals and jamborees have resulted in lots of fun, laughter and community spirit for everyone who has taken part in them,” says Dr. Kami Kandola, CPHO.

The dates for next year’s jamboree are already set and will happen on April 8, 2022.