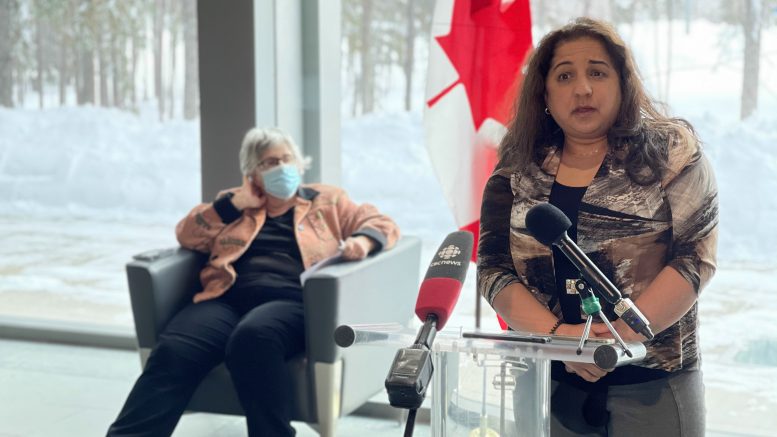 Dr. Kami Kandola addresses media in a bi-weekly COVID-19 briefing at the Legislative Assembly on Feb. 17.

Five cases are connected to the Gahcho Kué mine and the other is a Yellowknife resident.

The five individuals are isolating and doing well, reads a press release.

This brings the total cases connected to Gahcho Kué to 15.

“They [De Beers] have done everything possible to try to minimize the impact of the outbreak,” said Dr. Kandola.

Dr.Kandola says workers at the mine site are separated from each other and that De Beers is working with the CPHO and team to contain the outbreak.

Since the suspension of the mine on Feb. 6, 95 southern out-of-territory workers have been sent to their home province.

As of Feb. 17, 110 N.W.T workers are isolating in Yellowknife and are required to do so for the full 14 days, says Dr. Kandola.

According to a press release, there is no risk identified to N.W.T communities.

The new case in Yellowknife is connected to out-of-territory travel.

Canadian North passengers on flight 238 from Edmonton on Feb. 12, row three to nine are considered to be at risk of exposure.

No one else on the plane is considered at risk.

Dr. Kandola confirmed none of the new cases are considered a new variant of COVID-19.

Vaccine roll out on track

Cochrane calls the GNWT’s vaccination strategy “one of the most aggressive campaigns in the history of the NWT.”

The fourth shipment of the Moderna vaccine is scheduled to arrive, around Feb. 22.

However, health officials are still unsure as to how many doses of the vaccine will be coming due to shipment delays from Moderna.

According to the territory’s COVID tracker, 579 residents have received both doses of the vaccine.

In order to reach 75 per cent of the general public by the end of March, that requires over 26,000 residents to be fully vaccinated.

The vaccine schedule is updated regularly and can be found here.

Wastewater results will also now be posted on the COVID-19 dashboard.

Teachers are still not considered essential workers, but rather have been re-prioritized.

Although, teachers in smaller communities have already have had the chance to get vaccinated now teachers in larger centers know where they stand.

“Any front-line workers who cannot work virtually will be considered a priority and that includes teachers,” says Dr. Kandola.

Teachers are still required to follow the same protocols and isolation measures as any other worker traveling outside of the territory.

Teachers in larger parts of the North such as Yellowknife, Hay River and Fort Smith can expect to be one of the first to receive the vaccine in early March.


The $19 billion in funding will go towards provinces and territories