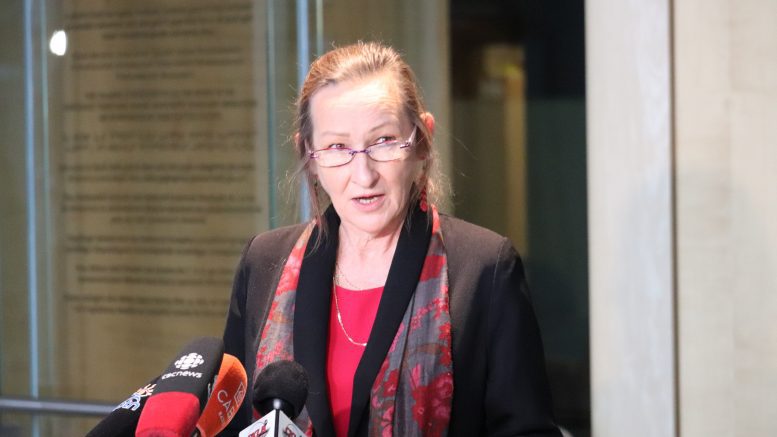 Premier Caroline Cochrane addresses the media at a press conference on Dec. 1. (Photo by Luke Carroll)

Residents traveling outside the Northwest Territories for leisure will no longer have the cost of their stay at a self-isolation centre covered by the territorial government.

The changes will start being enforced on Jan. 5, meaning anyone who arrives Jan. 4 and earlier will still have their two week stay covered.

“Moving forward, residents will be responsible for making their own arrangements for self-isolation, or paying for their stays in isolation centres when they are traveling for leisure purposes,” said Premier Caroline Cochrane at a press conference on Tuesday.

The government will continue to cover the self-isolation centre expenses for anyone who needs to travel for medical or compassionate reasons — such as a funeral.

Additionally anyone who hasn’t traveled outside the territory but is required to self-isolate — such as awaiting a COVID-19 test result — will also have the their stay at a self-isolation centre covered by the GNWT if it is their only available option to self-isolate.

Whereas anyone who is required to travel into the NWT for employment will have their stay at a self-isolation centre covered by their employer. Someone moving to the territory, not for employment purposes, will need to cover the cost themselves.

Although the prices vary depending on the isolation centre, the average cost is around $4000 to stay at one, in any of the four hubs — Yellowknife, Inuvik, Hay River or Fort Smith.

When asked what kind of money the government will be saving from the changes, Cochrane said there won’t be any firm numbers for a few months.

In a public hearing on COVID-19 when questioned on the savings, the health minister, Julie Green said the changes are expected to save the GNWT approximately $1 million a month.

The changes come a couple weeks after the territory strengthened household self-isolation policies, requiring all residents of a home to self-isolate if one member travels outside the territory.

Cochrane says with the stricter measures she does expect their to be a larger number of people who will break the rules.

“Not everyone takes COVID-19 seriously, not everybody believes it’s real… So there will be a risk that people will break isolation,” Cochrane said.

A press release says the enforcement team will have an increased presence at the isolation centres, and anyone who does not follow their self-isolation plan could face a fine up to $1,725.

“As the pandemic accelerates across the country, we need residents to consider whether their trips out of the territory are really necessary,” Cochrane said.

When asked whether changing the self-isolation centre policies were short notice as it is already December, Cochrane responded by saying the situation is unprecedented.

“I would say that the pandemic itself was pretty short notice, we got hit off guard with it,” she said.

Cochrane added the government could have implemented the self-isolation centre payment changes immediately, but decided not to. She said she recognized residents may have already made plans to leave the territory for the holidays with the intention of staying in a self-isolation centre upon returning.

“We’re not promoting people to leave, unless it’s essential. But we did want to be compassionate,” Cochrane said.

She added the decision to change the isolation centre policies came as the result of a series of engagement sessions held by the COVID-19 Coordinating Secretariat between Oct. 28 and Nov. 3.

This was with Indigenous and community governments as well business stakeholders and the results found the majority of participants in favour of ending the GNWT’s responsibility to pay for residents’ stay.