The family of Lloyd Edgi delivered emotional victim impact statements describing the trauma his loss has caused them.

Edgi, 28, died after being stabbed in the heart by his friend Colten McNeely in Fort Good Hope on Sept. 3, 2017.

McNeely, 27, was found guilty of manslaughter in January and is expected to receive his sentencing on Wednesday at the Yellowknife Courthouse.

Crown prosecutor Jill Andrews said she is hoping he will serve between seven and eight years. McNeely’s lawyer Peter Harte said he is recommending his client only serve between four and five years.

Edgi’s family described who it was McNeely took from them — a father, son, brother, friend and a talented athlete with a love for spicy food.

“I always have a sad heart when I see his two kids who have to grow up without a dad,” said Beverly Masuzumi, Edgi’s aunt. “He loved his kids so much… They loved him so much.”

Numerous members of the gallery teared up at the mention of Edgi’s children.

“My niece, she cried for days because she missed her dad,” said an emotional Cara Manuel, Edgi’s younger sister.

“We were such a close-knit family,” Kakfwi said through tears.

Lily Marie, Edgi’s aunt, said she used to joke that Edgi had a “cast iron stomach” because of how spicy he liked his food.

Nearly every statement talked about the lasting trauma from the 2017 incident.

Manuel said the loss of her brother, who was her “hero,” has left her struggling for years.

“I was so depressed,” she said of the first year after losing him. “I’m never going to be the person I was before.”

Vivian Edgi-Manuel, Edgi’s mother, became emotional as she recalled the last time she spoke with her son.

“He said ‘Thank you mom, for watching the kids, I’ll be back in a few hours’,” she choked.

She also described what has been taken from her since that night.

“I miss watching my son play sports,” she said. “I will never again hear my boy say ‘I love you mom’.”

Kakfwi said she worries about being able to provide financially for her children, a task she now has to do alone.

She said her and Edgi had planned a future together and now she is lost.

“I was brave when I was taking on this world with him,” Kakfwi said. “He should have lived a long fulfilling life with our family.” 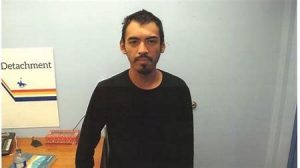 Throughout the statements, McNeely kept his head down.

But he later addressed the court, recognizing the hurt he has caused everyone in attendance.

“I don’t think anything can fix what I have done,” he said.

He added that he doubts he will ever be able to live in Fort Good Hope again.

Edgi’s sister, Manuel said she considered McNeely one of her close friends at one time.

She said she can’t forgive him because she doesn’t believe he has taken accountability for his actions.

Edgi-Manuel on the other hand said she will try to forgive McNeely for what he did.

“I have to forgive so I can move forward,” she said.

Edgi-Manuel said she still walks down the path where the incident took place, hoping to see her son’s spirit.