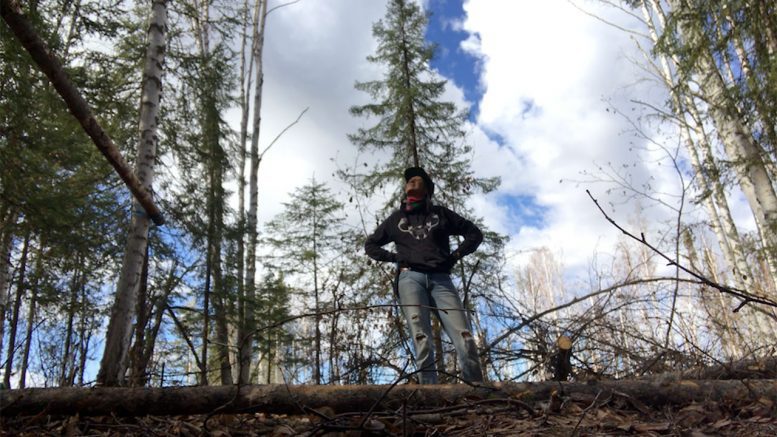 Melaw Nakehk’o has added the title of filmmaker to her already impressive resume as an artist, actor and moosehide tanner.

Nakehk’o, who is Dehcho Dene and Dënesųłiné, wrote, directed and shot the film K’i Tah Amongst the Birch, highlighting her family’s experience staying at a spring camp for five weeks during the early months of the pandemic.

“I was able to film little bits and pieces of our day throughout the camp,” she says.

K’i Tah Amongst the Birch was created as part of the National Film Board (NFB) of Canada series called the Curve, which showcases documentaries reflecting life in the COVID-19 pandemic.

In addition to capturing how one family dealt with the pandemic, the documentary also shares important stories ancestors passed down to Nakehk’o.

“We do have stories of when the Spanish Flu came through… What our people did, is go out onto our traditional lands and distance themselves,” Nakehk’o explains.

When the pandemic was first declared in March and the severity grew, Nakehk’o says she found it difficult to deal with the news and felt it was important to leave town.

“So many people were going through so many different things, like the loss of life was overwhelming,” she says.

And like countless others, COVID-19 hurt Nakehk’o financially. In normal times, she works at on-the-land camps, which went on hiatus as a result of COVID-19.

“All of the work I had for this whole year, was cancelled,” Nakehk’o says, “I suddenly had to home school my three kids as a single parent, so there was a lot of things that were stressful.”

However, she adds the experience of being on-the-land brought her family closer together — something she captured in the documentary.

Nakehk’o was born in Yellowknife and raised in Fort Simpson.

The film was recorded at her family’s camp, about an hour from Fort Simpson along the Deh Cho River.

The name of the film, K’i Tah, translates to “amongst the birch,” which describes the area of the spring camp.

Coty Savard, the NFB producer of K’i Tah Amongst the Birch, says it was an honour to work with Nakehk’o on the project.

“It’s a really beautiful film,” she says, “it was really special to be able to see people were still out there connecting to the land.”

Nakehk’o credits Savard and the entire team at the NFB for their contributions to the final product.

“Her and the team that she works with were excellent, very professional,” she says.

Going forward, Nakehk’o has helped produce a documentary called Revolution Moosehide which will be screening at film festivals this fall.


The $19 billion in funding will go towards provinces and territories