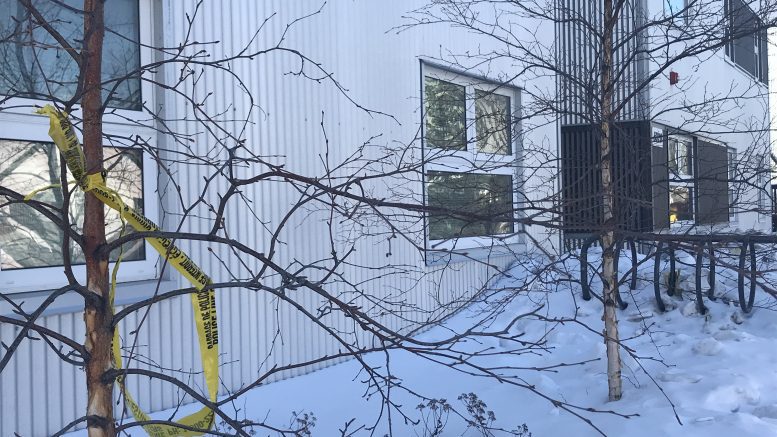 All that remains outside of Grayling Manor is a piece of used police crime scene tape. Arthur C. Green/CKLB Radio

The RCMP in Yellowknife is investigating a shooting incident that occurred in a downtown apartment building yesterday.

According to an RCMP news release,” On March 31st, at approximately 2:30 p.m., the Yellowknife RCMP received calls regarding gunshots coming from an apartment building on 53rd Street, in downtown Yellowknife.”

“When officers arrived on scene, they found a 40-year-old man, who sustained non-life threatening injuries,” Julie Plourde an RCMP Spokesperson said. “The man has been transported to the hospital by EMS.”

“No suspect has been arrested at this time,” Plourde said. “RCMP believe, from the evidence gathered at this time, that this is an isolated incident.”

CKLB Radio asked the RCMP what type of firearm was used and if a firearm was recovered from the scene.

“As these elements are part of the investigation, RCMP won’t be releasing further information on this incident,” Plourde said in a email. “If more information becomes available, we will advise.”

The investigation is ongoing.