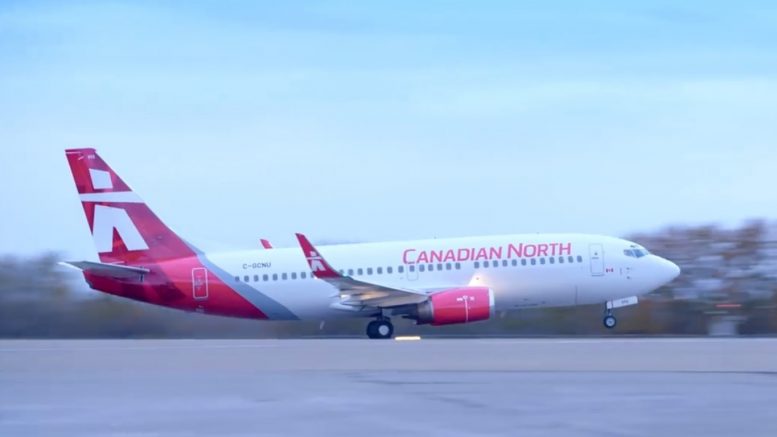 Screen capture of a Canadian North video showing off the new design on its planes.

Earlier this week, Canadian North announced it is reducing the Edmonton-Yellowknife-Inuvik passenger flight to once a day and cancelling the flight once to three time a week.

The notice adds smaller communities are likely to see their passenger service reduced to one flight every two days.

And for trans-territorial flights from Yellowknife to Nunavut, the passenger flights are cut from four times to twice a week.

The airline said passengers who are affected by the changes have automatically been rescheduled to the next available flight and will be contacted.

“While there is no clear end in sight to these challenges, Canadian North will continue to provide essential passenger and cargo services to the people, communities and organizations we serve, regardless of these circumstances,” reads the notice.

The country’s largest airline is the latest to announce changes to its flight schedule due to coronavirus concerns.

In a notice updated on March 18, Air Canada announced the suspension of its flights from Yellowknife to Calgary and Vancouver.

These will begin on Monday, March 23 for Calgary, and Wednesday, April 1 for Vancouver; both will last until April 30.

There is no mention of cancelling the Yellowknife to Edmonton flight yet. However, there are several connecting flights from Edmonton to Alberta, B.C., and Manitoba that have been suspended.

The above changes come on top of the cancellation of all international Air Canada flights.

The notice adds that customers booked on the cancelled flights will be contacted for next steps.

WestJet has also announced it has cancelled all of its international flights, beginning on March 22 for 30 days.

The airline’s website is still advertising flights from Yellowknife across Canada with no indication of changes to its schedule.

WestJet has published a list of flights where passengers may have been exposed to the virus. There are none connected to Yellowknife, but several from Calgary and Edmonton in the past few weeks. Passengers in the rows affected are asked to self-isolate for two weeks, those on the flight but not in the affected rows are asked to self-monitor for symptoms for that time.

The company is also allowing travellers to cancel or change their flight if scheduled to travel in March or April one time for free.