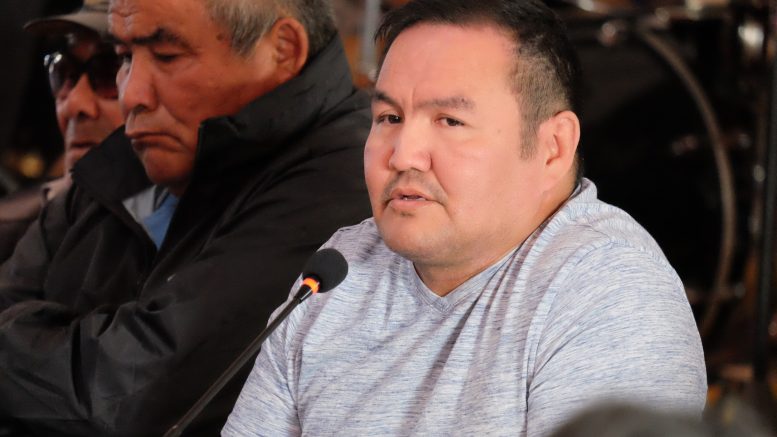 David Codzi is the president of the Ayoni Keh Land Corporation in Colville Lake. (Francis Tessier-Burns/CKLB)

Community leaders in Colville Lake are asking the Government of the Northwest Territories to step away from self-government negotiations.

“Rather than talking we want to get the work done,” says David Cozi, president of the Ayoni Keh Land Corporation.

It reads, “… no explicit connection was made between implementing the UN Declaration (on the Rights of Indigenous Peoples) and making progress on our agreement. Therefore it is difficult to reconcile your government’s stance on the UN Declaration with the GNWT’s self government mandate.”

In a follow-up interview. Codzi told CKLB, “We heard the Premier and MLAs talk about the new relationship with Aboriginal governments, yet at the negotiation table there were no changes.”

Now Codzi and Kochon are calling on the GNWT to step away from the negotiation table so it can re-evaluate how to implement UNDRIP in its negotiations.

GNWT negotiators are guided by Core Principles and Objectives, which are supposed to ensure consistency across social programs whether delivered by the territorial or an Indigenous government.

However, several Indigenous groups have called these principles too restrictive to properly negotiate.

During an exchange earlier in this session of the Legislative Assembly, Premier Caroline Cochrane admitted “it has been quite a while” since the government evaluated its principles. She then blamed federal laws as the reason.

“It’s not as easy as just changing them to meet the whim,” she said. “We also have to take Canada’s legislation, as well.”

Yellowknife North MLA Rylund Johnson, who brought up the issues with Colville Lake negotiations, said not updating the GNWT principles due to federal issues “seems to miss the point, and that is the federal government’s whole purpose being at the table.”

During the exchange, the Premier also said that any negotiations that may “impact finances or land or anything, it has to come through Cabinet,” effectively handcuffing negotiators from moving forward.

“For the amount of money spent talking about negotiations for self-government, we could have had a couple of bridges across the river,” says Codzi. “Rather than doing that, we could have had infrastructure in place, and services that we built at the community level.”

CKLB has asked the Department of Executive and Indigenous Affairs for a response to the community’s request that the government leave the negotiation table. We have not received an answer.

And if the GNWT doesn’t step away?

“I think we can really know that all the talking about Aboriginal relationship and recognition of rights is just that,” says Codzi. “It’s just talk.”

Colville Lake wants to keep negotiating directly with Canada, essentially to establish a skeleton of what a self-government may look like. This is called a “modular approach”.

Fort Good Hope is also using this strategy; it allows the communities to ease into the responsibilities of becoming a self-government.

Getting the basic structure down would also allow Colville Lake to access new federal funding to implement land claim and self-government agreements.

In the letter sent to the GNWT, the community estimates it could be eligible for up to $5 million in funding.

Right now, Codzi says his organization is underfunded and cannot adequately fulfill its responsibilities to beneficiaries of the land claim.

This funding would go a long way to ease that pressure.

“We have spent three largely unproductive years trying to advance negotiations with the GNWT,” reads the letter from Codzi and Kochon. It adds later, “We don’t believe the GNWT should be standing in the way of our ability to reach a self-government agreement with Canada.”


"We're hoping to get it cleaned up and put a plan together to open before the summer's out," says GNWT contractor.

NWT residents will not have to restart vaccines if outside the 42-day window: CPHO