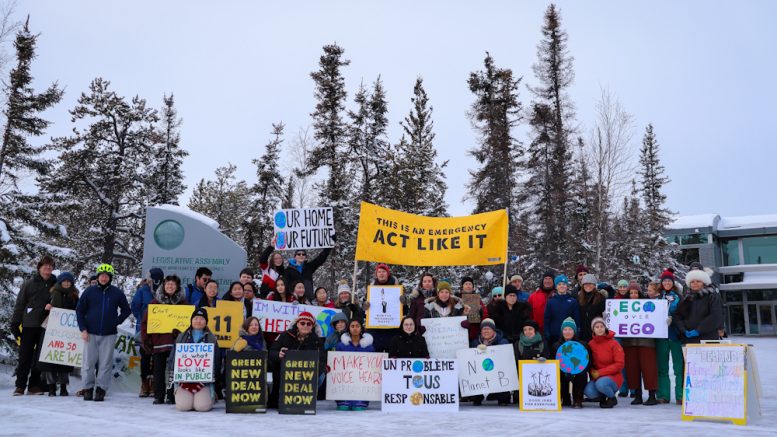 Members of Our Time - Yellowknife started circulating the open letter in December at a protest at the Legislative Assembly, calling on MP Michael McLeod to support a Green New Deal. (Francis Tessier-Burns/CKLB).

Local climate activists are patting themselves on the back after MP Michael McLeod has said he will support a motion in the House of Commons to introduce a Green New Deal.

The motion proposes swift changes to cut emissions, while transitioning workers into a green economy, all while respecting the rights of Indigenous people and other marginalized groups.

Our Time – Yellowknife has been the most vocal proponent of the Green New Deal.

In a news release, the organization said McLeod, “acquiesced to community concerns on climate, telling local organizers he will ‘vote in favor of motion M-1 for a Green New Deal as it is currently presented’.” It adds that he is the first Liberal MP to support the motion.

McLeod’s decision comes after Our Time – Yellowknife handed him an open letter calling on him to support the motion. The letter now has more than 150 signatures from people across the NWT; they include Indigenous leaders, MLAs, and students among others.

“This really shows the power of community organizing,” said Pretty Ngo, an organizer with Our Time – Yellowknife and grade 10 student at Sir John Franklin High School. “Initially, we received no response from McLeod, and then he wouldn’t take a public position on it. Then, we created so much public pressure that he gave in. I think this goes to show how we can make real change.”

According to the release, McLeod has said he will not be seconding the motion on account of having “some minor issues with it.”

CKLB has reached out to McLeod’s office for what some issues may be.

Hayden Moher is McLeod’s executive assistant. In an email, he confirmed the MP would vote in favour of the motion. However, there was no answer for why he would not be its seconder.

Our Time – Yellowknife is now calling on McLeod to take a stand against the proposed Teck Frontier oilsands mine south of Wood Buffalo National Park.

CKLB asked his office if he would be advocating against the megaproject to his cabinet colleagues. The federal government needs to make a decision on the future of the mine by the end of this month.

Moher’s response said that he couldn’t provide more details as McLeod was travelling to Ottawa this week.

We will update if we receive new information.