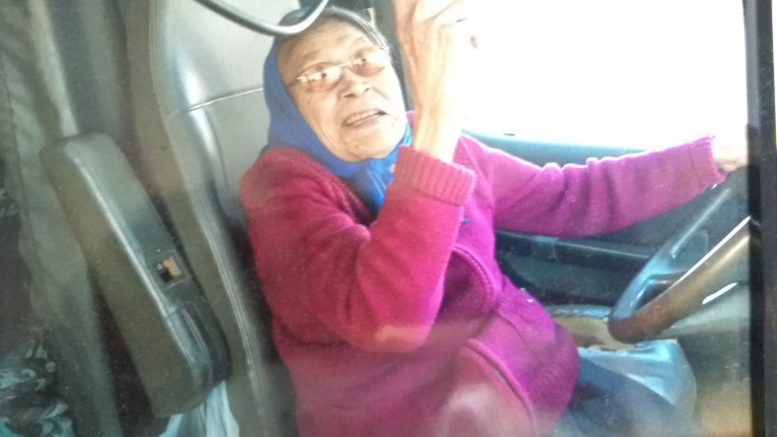 Therese Pierrot at the wheel of her son Ronald's big rig. (Photo courtesy of Ronald Pierrot).

Friends and family in the Sahtú, and across the Northwest Territories, are mourning the death and celebrating the life of highly-respected and beloved Elder Therese Pierrot.

Her son Ronald Pierrot says Therese was 85-years old when she died peacefully of natural causes on Tuesday at the long-term healthcare facility in Norman Wells.

Ronald says Therese was also mother to seven girls, one of whom has since passed.

She was also grandmother to several grandchildren, “too many to count,” says Ronald.

Ronald says she was born on the land and always maintained her respect for the land.

He said he is also well aware that his mother was considered to be one of the best traditional storytellers in the North.

“She spoke her own language really well and she also spoke English really well because she went to residential school. The nuns taught her English. She was also brought up in a traditional way and learned the stories,” Ronald said.

“Therese was beautifully eloquent in both her traditi0nal language of North Slavey, as well as English,” said Kochon.  “She was extremely well-known across the North and will be sorely missed.”

Ronald says the outpouring of love and respect for his mother he has received soincer her passing means alot to him.

“Just a message or a phone call..has given me a sense of comfort and allowed me to carry on.”

The funeral for Therese Pierrot is to be held Saturday afternoon at the Church of Our Lady of Good Hope.