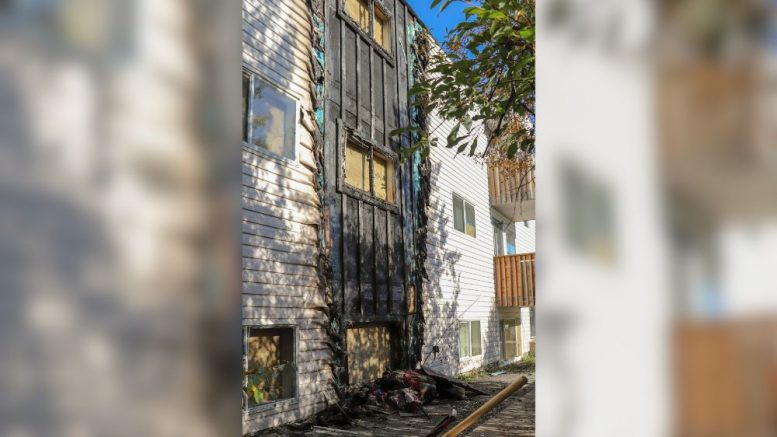 No one is reported hurt but several residents have been indefinitely displaced after a fire Sunday morning at Crestview Manor on 52 Ave. at 50 St. in Yellowknife.

According to a news release from the city – fire crews got the call just before 8:00 am and arrived to find the three-storey unit already being evacuated.

Firefighters noticed smoke coming from the rear of the building.

Later in the day, it was clearly visible due to the soot and charred outside the back of the building where in the fire had occurred.

Municipal Enforcement Division (MED) officers blocked off streets in the area while crews knocked down the blaze.

It’s not clear what floor it broke out on.

A worker on Monday said he thought the damage was contained to three units on three different floors.

NWT Fire Marshal Chucker Dewar says investigators from his office have completed their initial look at the damage and have turned the building back over to its owners – Northview Properties.

He says the cause has not been yet been determined but adds there is nothing to indicate the fire is suspicious at this stage.

Dewar says if anyone knows otherwise, they should contact RCMP.

A neighbour who lives in the building but didn’t want to be identified said she understands careless use of matches may be the cause.

It’s not clear exactly how many residents have been forced from their homes.

Fire crews at the building is commonplace as it has been plagued by a rash of false alarms.

One resident is still before the courts, charged with mischief, for allegedly pulling the fire alarm.

The situation got so bad that Northview offered a reward for anyone who could prove who was maliciously pulling the fire alarm.

In 2015, firefighters had to rescue a woman from the neighbouring Polaris apartment building during a massive fire that eventually destroyed the building.