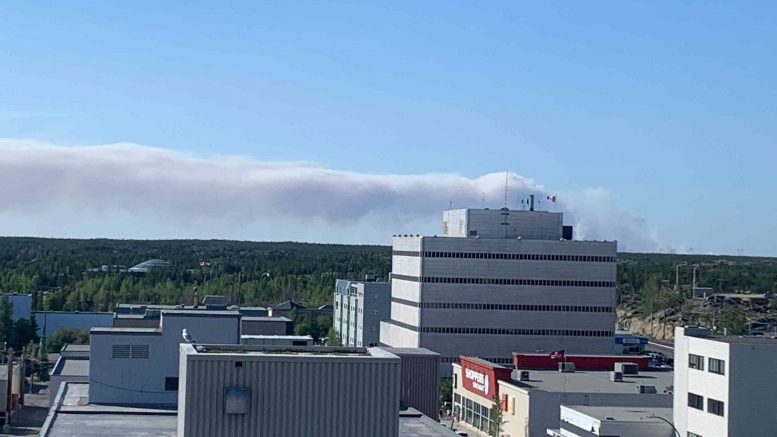 A wildfire has Yellowknife’s attention and beyond after photos were posted to social media Thursday showing a huge, drifting plume of smoke that was quite visible from any high rise building in the capital city.

According to the territorial government’s Department of Environment and Natural Resources the fire, roughly towards Behchoko, is now just 45 kilometres from the city and is burning out of control.

The fire, located south of Awry Lake, has escaped containment and is now more than 25 square kilometres or 250 square hectares in size.

They add that the fire danger level in the area is extreme at this time and the fire is exhibiting extreme fire behaviour.

That means it’s almost too big to put fire crews on the ground to fight it.

Crews and tankers have been pulled off the fire and ENR is establishing an Incident Management Team in Yellowknife to develop a plan to limit the growth of the fire.

No cabins are currently threatened, and no communities are at risk at this time, according to the government.

There are concerns however about the fire damaging power lines between the Snare Power plant and Behchoko and Yellowknife.

There is also a fire burning near Dettah where the smoke is also visible from Yellowknife.

The total number of fires in the Northwest Territories is now 67 with lightning getting the blame for most of the recent ones.

44 have been declared out while nine other fires are deemed either out of control or being held.

No injuries have been reported from any of the fires.

Keep it on CKLB or check our website right here for the very latest updates on this story.