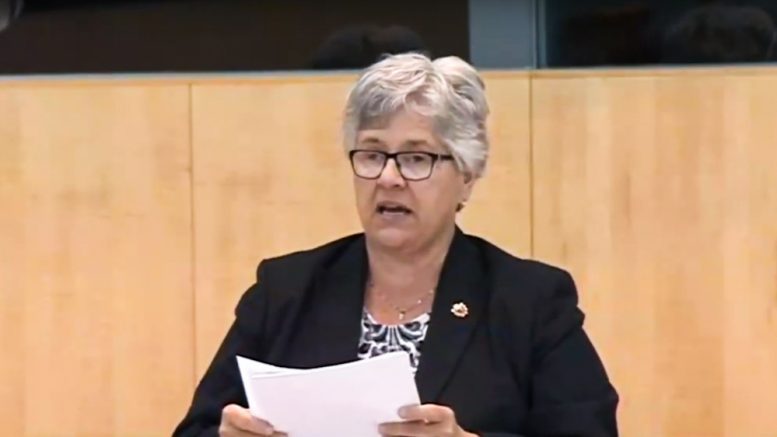 Yellowknife Centre MLA Julie Green is the chair of the Special Committee to Increase the Representation of Women. (Live feed)

Wait and see what happens.

That’s essentially the first of three recommendations made by the Special Committee to Increase the Representation of Women.

The committee released its final report earlier this week in the Legislative Assembly.

The territory has the lowest percentage of women in its legislature across the country, just over 10 per cent.

The committee’s goal was to find strategies to increase that to 20 per cent by the 2023 election and 30 per cent by 2027—four and six seats, respectively, held by women.

But the report doesn’t mention any specifics on how to achieve those numbers. Rather, the committee recommended waiting to see the results of the upcoming election. If there are four women MLAs then mission accomplished, though not necessarily long-term; if there are fewer than four women then it recommends the public vote on how to increase the representation of women.

The main idea residents would vote on would be how to introduce guaranteed seats for women. Essentially, if only two women were to be elected in 2023 then two other female candidates who lost would be appointed to fill the quota.

The committee got mixed results as to whether this would be the right way to increasing representation. During the Yellowknife public meeting in January, one audience member called them “pity seats” while another said it would be a welcome “radical change.”

“You’re right, we are kicking the can down the road,” she said. “Let’s see if all the recommendations in the interim report would bring us closer to this increased representation.”

Earlier this year, the committee had several more substantive recommendations including, adding childcare as a constituency expense, making the Legislative Assembly more family friendly with possibly adding a family room and change tables in the bathrooms, and allowing MLAs be absent with pay for up to four months for “pregnancy, childbirth or the care of a Member’s child following birth or adoption.”

The second recommendation is the most tangible and suggests creating an election rebate program for any candidates the receive at least 5 per cent of the vote.

The rebate program would reimburse 50 per cent of the eligible expenses, which includes things like signs, advertising and even childcare. The reimbursement would be set at a maximum of $3,000 per candidate.

Green said that while the government will be working with the Chief Electoral Officer on setting up the rebate program, it will not be ready for this year’s election.

The final recommendation hinges on the creation of a polytechnic university to create a training program for women with political aspirations in territorial and Indigenous governments.

“It’s true we’re assigning this to an organization that doesn’t currently exist and it may not for years,” said Green. “So my hope is that this may be taken up by another organization but what we’re looking for in the end is this very intensive leadership training.”

And if the polytechnic falls through? Well then it’s up to future legislatures to figure that out, said Green.

Asked if she thought 20 per cent representation would be achieved following this year’s election, Green said she’s heard many women are interested across the territory.

“One of the things that the committee did by default was raise a lot of attention,” she added. “I am very hopeful that there will be both more candidates and more women elected, we need both.”