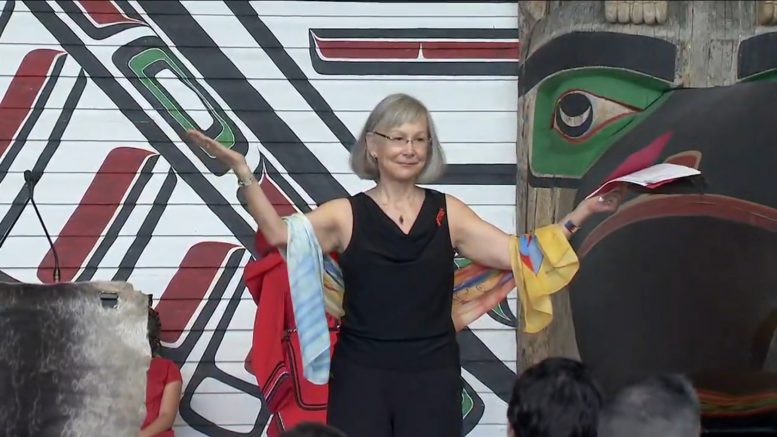 Chief Commissioner Marion Buller after delivering the findings by the National Inquiry into Missing and Murdered Indigenous Women and Girls. (Event live feed).

The testimony of more than 2,000 family members, survivors, experts and knowledge keepers has resulted in the National Inquiry on Missing and Murdered Indigenous Women and Girls Final Report.

The report, titled Reclaiming Power and Place, was presented publicly to Prime Minister Justin Trudeau and other senior cabinet members during a closing ceremony this morning at the Museum of History in the capital region.

In a news release, the national inquiry says the report “reveals that persistent and deliberate human and Indigenous rights violations and abuses are the root cause behind Canada’s staggering rates of violence against Indigenous women and girls and 2SLGBTQQIA (two-spirit, lesbian, gay, bisexual, transgender, queer, questioning, intersex and asexual) people.”

Chief Commissioner Marion Buller did not mince words during the ceremony.

“This is genocide,” she said. That statement was met with a round of applause from the hundreds of people in attendance.

The report delivers 231 “Calls to Justice” directed at governments and all Canadians. These calls to justice go beyond recommendations and are presented as “legal imperatives.” The Calls to Justice call for action in health, security, justice and culture.

Some of these include the implementation a National Action Plan dedicated to ensure equal access to housing, jobs, education, safety and health care. It also wants to see the establishment of a National Indigenous and Human Rights Ombudsperson and National Indigenous and Human Rights Tribunal. The Commission also want to see the federal government create an independent body that will report on the progress of the Calls to Justice in the report.

Commissioner Buller ended with a broader message to all Canadians.

“The murders, the abductions, the human trafficking, the beatings, the rapes, the violence and, yes, the genocide will continue unless all Canadians find the strength and courage and vision to build a new, decolonized relationship with each other based on respect and self-determination.”