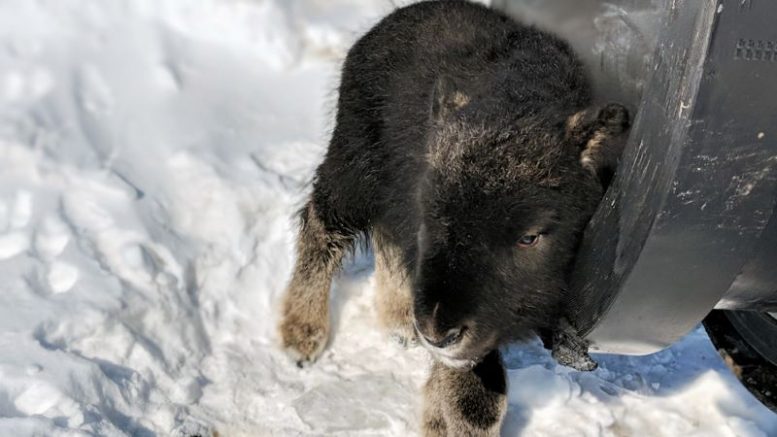 Earlier this week there was a rescue operation near Gahcho Kué diamond mine involving a furry, four-legged infant.

Tom Ormsby is a spokesperson for De Beers Canada, which owns the mine located about 280 kilometres northeast of Yellowknife. He explained that Sunday the baby muskox was spotted on the mine’s property while a team was setting up to work on a water line. The workers then called the mine’s environmental team.

“They realized this was probably a newborn,” says Ormsby. “In fact, the umbilical cord was still attached.”

The team then cordoned off the area to observe the calf and tried contacting the Department of Environment and Natural Resources (ENR).

Being the weekend, Ormsby said the team never heard back from ENR; current protocols prevent the environmental team to engage wildlife unless specifically directed to do so by the department.

While waiting for a response, the mine team deployed some of its drones used for surveying the grounds. They found caribou, grizzly and wolf tracks nearby.

“The team thought that contributed to the calf getting separated from the other animals,” says Ormsby. They also spotted a small group of muskox about two kilometres from the site.

With no answer by the end of the day, the team left the baby muskox and “let nature take its course.”

Mother nature was merciful that night—Monday morning, the calf was still around the site unharmed.

The mine team reached out once again and finally heard from ENR, which explained how to relocate the calf near the group.

Of course, the herd had moved on during the night. The mine team loaded the calf onto a sleigh and set out by snowmobile to track it down.

Finding the group was one thing; reuniting them was another. 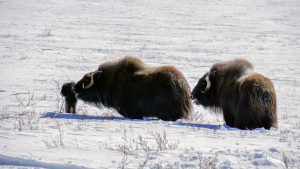 It took three attempts but the herd was reunited. (Photo courtesy of De Beers Canada).

The team first dropped the baby off about 25 meters away from the group, but Ormsby says the adult muskoxen took no interest. The calf actually turned and walked back to the mine team. They tried again and this time the herd, which had two other calves, turned and started moving away. Finally, by the third attempt, the adults took in the baby with one of the females nuzzling and licking it. Reunited, the herd started moving away again with the calf in tow.

“With the presence of us and this is an unusual situation,” says Ormsby, “I guess that small group had to really assess what was going on.”

Ni Hadi Xa is an organization made up of five different Indigenous nations, which oversees the mine operation through the lens of traditional knowledge. (Disclaimer: the author’s partner sits on the board.)

“We were pleased that the protocols were followed,” says Rosy Bjornson, the organization’s environment manager.

The board was first notified of the situation on Monday morning, and received updates throughout the day. Bjornson says the board has a limited capacity due to members being spread across the North Slave region.

“We can’t all be out there,” she says and added a reminder of how humans should interact with wildlife: “We’re in their territory.”

Ormsby says wildlife near the mine isn’t uncommon, being in a remote area, so workers are trained to know “wildlife has the right of way.” In this case, he added, “Everyone was pretty happy to hear it’s certainly a good outcome.”


A total of two cases of COVID-19 have been identified at the site.