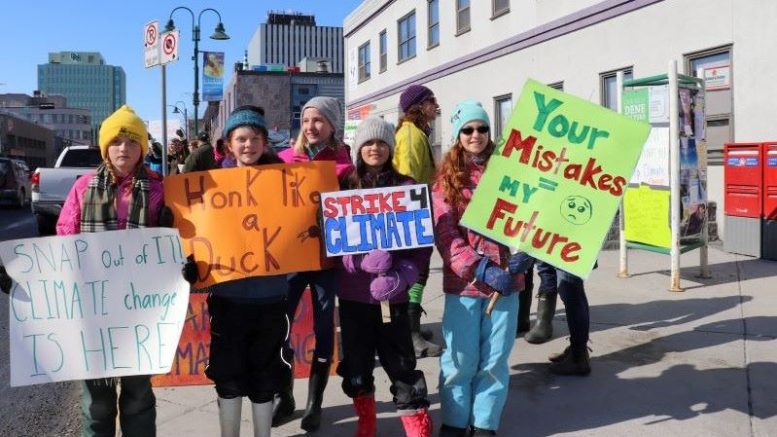 A relatively small but enthusiastic group of environmentally-conscious students held an information picket on Friday in downtown Yellowknife.

The youngsters set up in front of the Post Office and were encouraging passing motorists to honk their horns if they believe climate change is real.

They were also pushing their message by engaging with pedestrians who took the time to stop and chat about a host of environmental issues.

Ella Cokelj, 16, was one of the main organizers.

“We’re here to support action on climate change. It’s a movement that originated in Sweden when a young lady held a strike in front of her parliament. She was protesting a lack of action on climate change and encouraging more initiatives to take place, Ella said. “It has since turned into an international movement. We’re super excited and proud to join the cause here in Yellowknife.”

Ella added that the message to adults is to be conscious of the world they will eventually leave behind and for them to try their best to preserve the planet for future generations.

There were adults involved in the protest as well including some of the youngsters’ parents, officials from Ecology North and Frame Lake MLA Kevin O’Reilly.

They stressed however that the event was a youth-driven initiative and was organized with next to no input from adults.

Scientists have said that there is no doubt that climate change is real, the earth is heating up and the effects of climate change are the most dramatic here in the North.