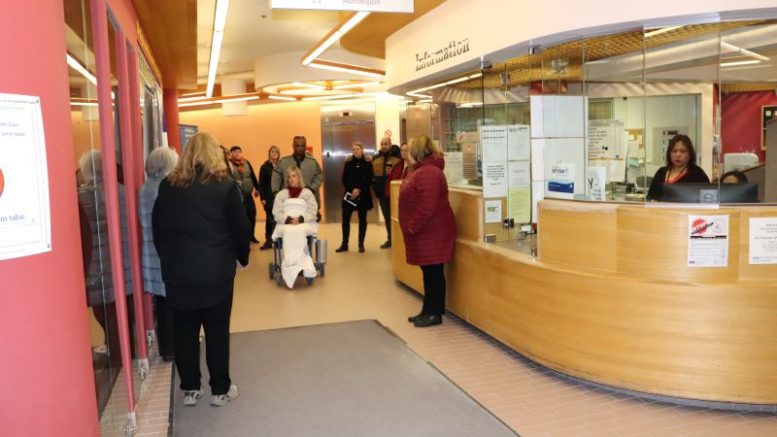 Stanton Hospital staff hold a mock patient move May 2 ahead of the actual move this Sunday. (John McFadden/CKLB photo)

You might want to mark that on your calendar – that’s three weeks from this Sunday.

That’s when the emergency department at the new Stanton Territorial Hospital will be up and running.

It’s not far from the emergency department at the old Stanton, but hospital officials want to be clear, there will be no one in emerg to help at the old hospital after 6:00 am on the 26th.

That’s important information for anyone who may have a medical emergency that day.

That information was relayed to CKLB Thursday as hospital staff and senior officials gathered for a mock patient move.

A hospital worker, posing as a patient, was taken in a wheelchair from a room at the old Stanton to a new hospital room in under ten minutes.

The patient move will also happen on May 26th beginning at 9:00 am.

It’s expected that between 40 and 50 patients will be moved along with about a dozen extended care, full-time patients.

The plan is to have all patients in their new hospital rooms by mid-afternoon the same day.

Some patients will move in wheelchairs while others will be wheeled over in their actual hospital beds.

Hospital staff members will accompany each patient while they are being moved.

A temporary tunnel will be constructed between the two hospitals to protect patients and staff from the weather.

The entire hospital move, including the patient move, is being coordinated by Peterborough, Ontario-based Health Care Relocations (HCR).

The unique company, which also has offices in Victoria, B.C., the U.S., Sweden and Australia, only moves hospitals.

Its staff travels all over the world and has moved numerous other health care facilities, including their patients.

They’ll be busy over the coming weeks moving equipment and furnishings from the old hospital to the new one.

Officials say they chose HCR to move the hospital because of its reputation, experience and expertise.

The $350 million state-of-the-art hospital has been under construction for some four years now.

It is reportedly on time and on budget.

(Full disclosure: the author of this report has worked in the past as a hospital mover for HCR but not in a supervisory capacity)