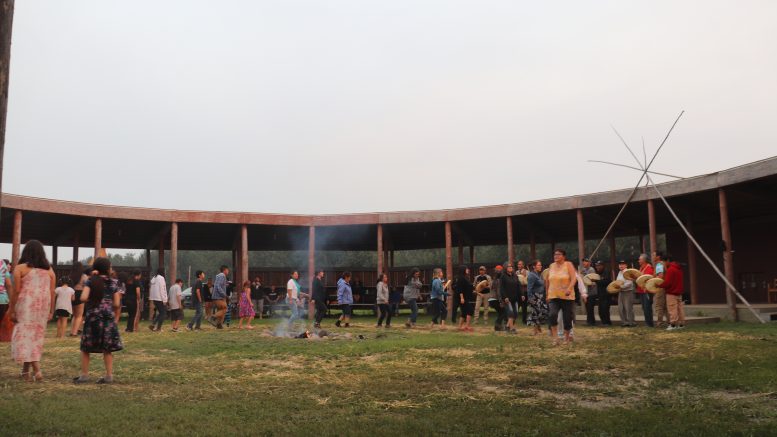 Multiple drum dances were held at the Arbor in Lı́ı́dlı̨ı̨ Kų́ę́ First Nation for Treaty 11 commemorations. Numerous attendees said these were some of the most powerful drum dances they had ever participated in. (Photo by Luke Carroll/ CKLB Radio.)

Let’s get one quick thing out of the way: the simulation is not a reenactment of signing a treaty.

For the past year or so, Jane Arychuk has been working for Dene Nation to come up with a plan to improve education for Indigenous youth in the NWT. As part of that process she decided to hold a treaty simulation for youth and get ideas to put into the plan.

Arychuk got in touch with the Gordon Foundation, which has been running these simulations since 2018.

The youth will be split into three groups: one representing an Indigenous nation, the other two the territorial and federal governments. Then the process is supposed to simulate negotiations on how the Indigenous nation will take over education responsibilities. After that, the youth change groups to see implementation from a different perspective.

“We hear a lot about treaties, but do we ever really hear how or practice how to negotiate treaties and implement (them),” says Arychuk.

Arychuk says this will be the first simulation linked to a numbered treaty — Treaty 11 — and will discuss the 100th anniversary of the signing.

That’s what Rayna Vittrekwa got to experience first-hand earlier this year.

The 23-year-old from Teetł’it Zheh (Fort McPherson) was one of about 20 youth participating in a national treaty simulation.

“I felt like it was finally time for me to know more about what’s happening with treaties and implementation,” said Vittrekwa. “I’ve always assumed these were boring topics. I wasn’t going to understand them. So I thought this was a great opportunity for me to get a fresh start.”

Similarly to the one Dene Nation will be holding, the national simulation was focused on education. 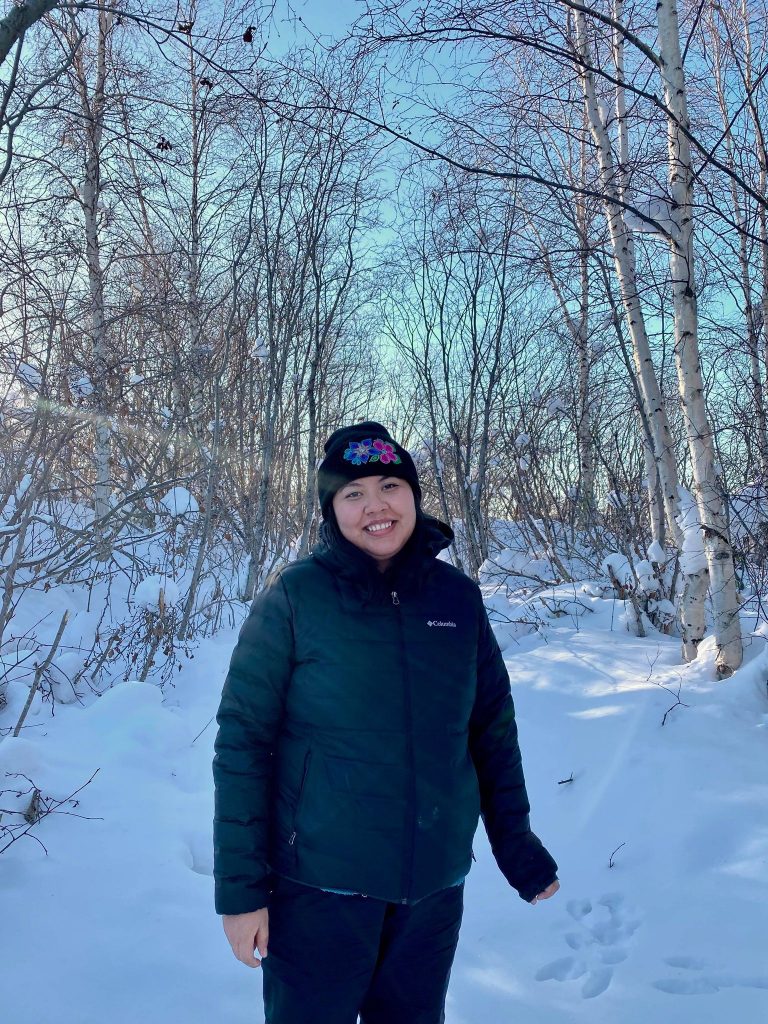 Rayne Vittrekwa is a 23-year-old Teetł’it Gwich’in. She participated in a national treaty simulation in March. (Photo courtesy of Vittrekwa)

Vittrekwa started in the group that was representing the Indigenous nation to come up with a plan to “Indigenize” the education system.

They proposed more culture days, more time on the land and even having a system for hunters to still get credits if they miss school.

“It was a great time to just think about as many ideas as we could to have a better education system… And it was great to jump off each other as a group and learn a lot too, especially from each Indigenous nation that we are from originally,” she said.

After that she became part of the territorial government group for implementation. She said the group was harder to navigate with all of its restrictions on which topics it was willing to discuss.

A mile in someone else’s moccasins

Kathleen Makela, the Gordon Foundation’s program manager, says that tension is built into the simulations.

“As Indigenous people, we’ve always been taught that you don’t judge someone until you’ve walked a mile in their moccasins,” she said. The simulation, she added, “does help young people to understand that this is complex and this is why coming up with a self-government agreement takes years and years of negotiation. And then the implementation also takes years.”

The foundation started the simulations in response to a report that showed Indigenous youth don’t have many opportunities to learn about and participate in modern treaties.

Since 1975, 26 modern treaties have been signed between Indigenous nations and Canada. The North has led the way in many of the signings, including land claims and self-government agreements.

The simulations draw on that expertise by having some former negotiators and other officials guide the youth through the process. Some local experts that have participated in past simulations include John B. Zoe and Ethel Blondin-Andrew. Dene Nation’s upcoming simulation will include other experts like Stephanie Irlbacher-Fox and Larry Innes, among others.

Vittrekwa encourages anyone with even a little bit of interest in treaties to sign up. She adds it was a good experience, especially as a young person.

It was very engaging. They wanted us to build on leadership and public speaking,” she said. “It was really empowering, as a youth, to have our thoughts and ideas be centered.”

Now she says she even sees herself being part of negotiations for real if the time comes.

So far, 17 youth have signed up to be part of the upcoming simulation, which will take place July 26 to 30.

There are 20 spots available, anyone interested can get in touch with Arychuk.