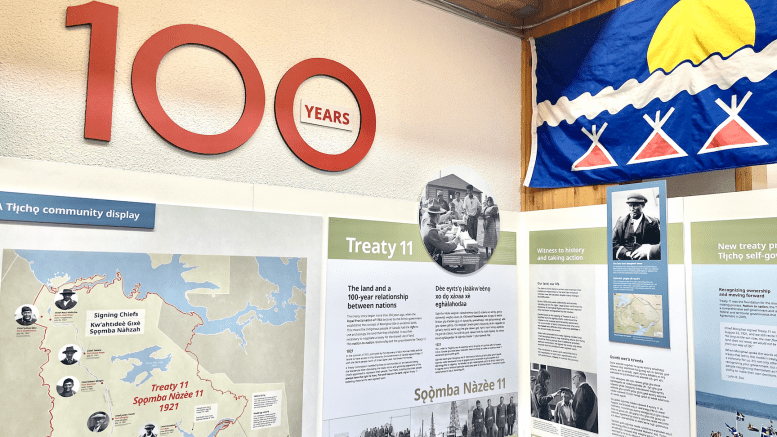 The PWNHC hosts a new exhibit to honour the signing of Treaty 11 in Behchokǫ̀ 100 years ago. ( Mariah Caruso/ CKLB)

The official opening will take place on July 16 at 1 p.m. where a fire feeding ceremony, remarks, tea and bannock will be provided.

The exhibit shares the story of the 100-year relationship between Canada and the Tłı̨chǫ, reads a news release.

A treaty medal, as well as a hand-sewn replica of the chief’s treaty jacket and pointed-toe moccasins will be on display. 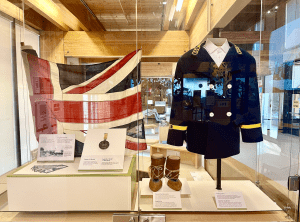 A showcase of artifacts and replica garb. (Mariah Caruso/ CKLB)

The traditional garb was crafted by community members Georgina Frankie and Frances Richardson.

A replica Treaty 11 binder has been created also.

Sarah Carr-Locke is the director of the PWNHC and says she’s proud of this exhibit.

“I think it’s a nice opportunity for a little bit of education on the importance of Treaty 11,” she says.

“It really has the community perspective and voice.”

George Mackenzie is the Tłı̨chǫ Grand Chief and he’s excited to check out the exhibit, as well as Chief Clifford Daniels for Behchokǫ̀. 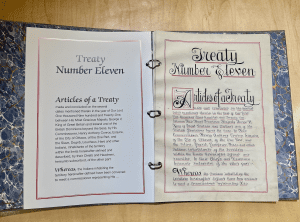 A replica Treaty 11 binder was created to give guests an impression of the document. (Mariah Caruso/CKLB)

“Chief Mǫwhì knew what was coming and 100 years later we are on the path that recognizes our nation and our land. The exhibit also highlights the memories we have of annual Treaty days when the Tłı̨chǫ people would travel by canoe, gather and celebrate together with traditional dances and feasts,” says Mackenzie.

The items will be collected and sent back to Behchokǫ̀ so they may be on display for its Treaty 11 celebrations, and then sent back to the museum where they will be for a year.