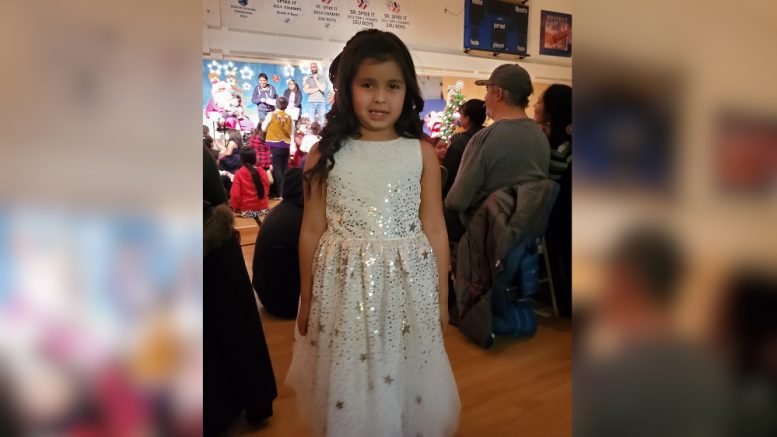 Claire Marie Tobac, 7, was mauled by a dog in Fort Good Hope on Wednesday. She is now recovering in Yellowknife. (Photo courtesy of Tobac family)

Warning: This story contains details of an animal attack.

On Wednesday, Jordan Tobac got a frantic call saying his seven-year-old daughter had been attacked by a dog.

He says he dropped everything and rushed to the field in the middle of Fort Good Hope. He and his partner found their daughter, Claire Marie, nearby covered in blood.

They sped to the health centre.

“Claire was scared. I was scared. Her mother was scared and we just wanted her to be inside the health centre and that the nurses would take care of her,” he says. “I cannot commend the nurses well enough, they did such a good job for keeping Claire in good hands.”

Tobac had to gather himself several times when speaking to CKLB.

“It’s a feeling that no parent ever wants to go through.”

Tobac says they called for a medevac, but were told they were all already out on calls and couldn’t come to the community.

“When you hear that, what can you do?” says Tobac.

Staff at the health centre stitched the worst of Claire’s wounds on her head and the family had to wait an entire night for a scheduled flight to Yellowknife the next morning.

“Everyone says our health care system is a joke. I didn’t really understand because I don’t really go through it,” says Tobac. “But there are three medevacs that are out of town, and you can’t even send in one for a little kid that got mauled?”

The Northwest Territories Health and Social Services Authority (NTHSSA) contracts air ambulance services. According to the NTHSSA, the provider has three aircraft’s based in Yellowknife and one in Inuvik.

“As an additional patient safety support, there is a contingency plan for additional resources (crew and planes) that can be activated immediately to ensure critical transports are fulfilled, as and when needed,” said Jack Miltenberger, communications coordinator for the NTHSSA, in an email.

CKLB asked why a medevac was not dispatched later the same day rather than have the family wait overnight.

“Medevacs are dispatched according to triage needs meaning all patients are attended to in order of condition and stability. While we cannot speak to any specific care or services provided to ensure we protect patient privacy, in general, if the resources (airplanes, crew) are not readily available, it is because they are already being used for transport of patients whose condition made critical care transport a necessity. In some cases, individuals may go by commercial flight if their condition is deemed stable enough for this type of transport,” wrote Miltenberger.

CKLB also reached out to RCMP about the incident.

“Fort Good Hope RCMP did not receive a call for service on the incident described. The Detachment Commander has been made aware of an incident that involved a youth and a dog, however, as we do not have an active investigation on-going, we have no further details,” said Marie York-Condon, NT RCMP spokesperson, in an email.

Claire made it through the night and onto the flight to Yellowknife where she was seen by doctors at Stanton Territorial Hospital.

So far her recovery is going well; she’s even out of the hospital, but she and her mom are staying in Yellowknife for a few days for monitoring.

After going through the ordeal, Tobac has a message for all communities.

“Please tie up your dogs. I don’t want any parent to go through this. Please watch your babies… My daughter is lucky that she had someone there. Don’t wait for something to happen… You never know what a dog could do.”

The family is thanking staff at both the health centre in Fort Good Hope and the hospital for the care they gave Claire.