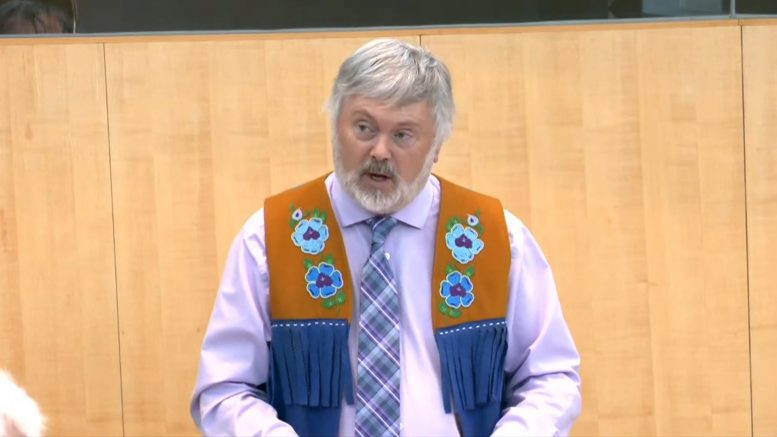 Frame Lake MLA Kevin O'Reilly has introduced a bill that would produce more transparency around resource royalties in the territory. It passed second reading on June 1. (GNWT image)

But it did so without the support of cabinet.

The bill would amend legislation to allow for the disclosure of information on resource royalties to an MLA or Indigenous government in the development or evaluation of policy.

According to O’Reilly, Bill 29 does not seek to create new powers with respect to mining and petroleum activities nor create any new regulatory structure to govern performance. The private member’s bill does not allow access to any proprietary or financial information. The bill also does not allow for the public disclosure of royalty information.

“This is the first step towards greater transparency and reporting of the monies paid to our government for resource development,” O’Reilly said.

“Much more work remains to be done to ensure NWT residents know what the revenues are from development so we can better manage these resources for today and future generations.”

R.J. Simpson, government house leader, objected to the bill on behalf of cabinet.

“This bill proposes to amend three pieces of land and resources legislation, however, to date, there has been no consultation with Indigenous governments, industry or the public on the proposed amendments,” Simpson said.

Simpson went on to say the Department of Industry, Tourism and Investment is developing the Mineral Resources Act regulations with input from all impacted parties, including the intergovernmental council, other Indigenous governments and industry members.

He said that as it stands, standing committees in addition to Indigenous governments don’t have access to this information which would affect the Standing Committee on Economic Development.

“I don’t know how either of those partners are supposed to be meaningfully engaged in that process,” he said.

Johnson said the bill is not asking for much and if government asked for industry partners’ consent for the information the bill would be pointless, but that has not happened to date.

The bill ended up passing with members of cabinet abstaining from the motion.

Bill 29 has been sent to committee of the whole for review before third reading.