MLA Steve Norn has been referred to the integrity commissioner after he allegedly broke COVID-19 protocols.

Rylund Johnson, caucus chair, was directed to file the complaint “in relation to the allegations,” the legislative assembly announced in an official statement. It did not say what the allegations were.

“The Commissioner can receive and investigate complaints that a Member is in a conflict of interest or has breached the Code of Conduct,” the release reads.

The integrity commissioner must give notice to the member before investigating and then provide a report to the speaker of the house.

The Yellowknives Dene First Nation (YKDFN) issued a letter to the premier and legislature calling for Norn’s resignation for breaking COVID-19 rules.

First reported by Cabin Radio, Jason Snaggs, CEO of YKDFN, also confirmed with CKLB by email, that the letter calling for Norn’s resignation was sent.

Chief Balsillie also wrote a letter to the premier and legislature stating the Deninu Kųę́ does not support the removal of Norn as MLA. 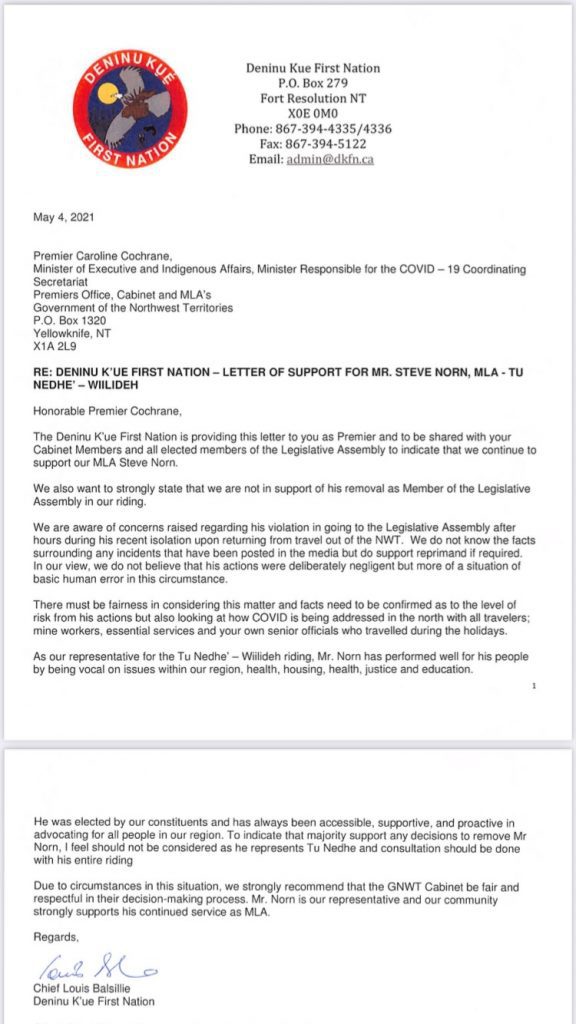 The letter says that Norn has “performed well for his people,” being vocal on issues important to the region. It says he has always been accessible and supportive.

Balsillie concludes that more consultation should be done with the entire riding before a decision is made on the fate of its representative.

The letter addresses the concerns of Norn leaving isolation early, saying “We do not know the facts”  but adds Balsillie is in support of “reprimand if required.”

“We do not believe his actions were deliberately negligent, but more of a situation of basic human error in this circumstance,” it reads.

Norn identified himself and a family member as two positive COVID cases identified in Yellowknife in late April.

In an official statement he claimed to have self-isolated for the full 14 days and only discovered to have tested positive after.

However, Cabin Radio reported Norn visited the legislature a day before leaving isolation.

Health officials won’t say whether the current outbreak at N.J. Macpherson School is connected to Norn.