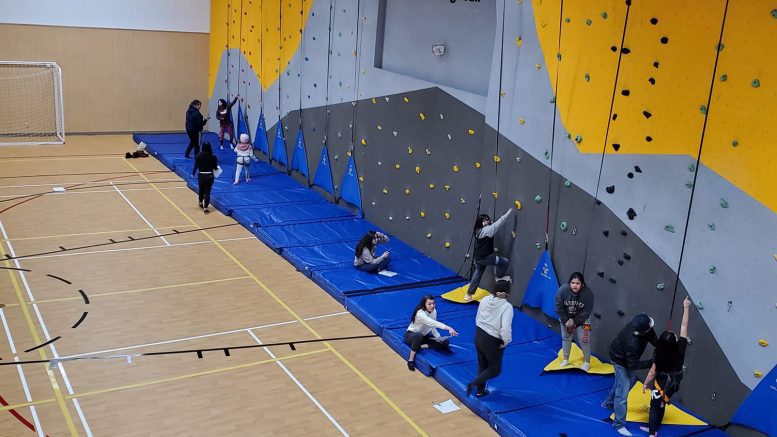 The new climbing wall in Behchokǫ̀ has led to more and more community members taking up the sport.

Colinda Blondin, recreation manager for Behchokǫ̀, said the climbing wall opened last October. She said that even though the COVID-19 pandemic threw a wrench into the community’s plan to have the wall finish sooner due to the need for expertise from Edmonton to install it, the wall has been received well since opening.

“Not a lot of people took it up at the beginning, but it’s slowly been working up,” she said.

“Now we’ve got our staff trained and recently had our spring carnival so people were checking out the program.”

Blondin said there has been a mix of adults, kids and teens participating in the drop-in program and people are really starting to take to wall climbing.

A core group of staff, enthusiasts and volunteers have driven the success of the program, according to Blondin. Some are even former rock climbers from the south who work and live in Behchokǫ̀.

She now hopes that partnering with the Yellowknife Climbing Club (YKCC) will help drive interest in the program and more activities can be planned in the future.

The YKCC will be taking a trip out to Behchokǫ̀’s Kǫ̀ Gocho Sportsplex Centre on April 25 with 10 youths to get an early start to their mostly-outdoors climbing season.

Jean-Fraincois Dufor, president of the non-profit climbing club, said he is excited to be going getting out to Behchokǫ̀, especially since COVID-19 health restrictions has limited his club’s access to Yellowknife’s only indoor climbing wall at the Fieldhouse.

“The Fieldhouse in Yellowknife only has the capacity for five climbers inside, so that makes it hard to create or promote an event, but now we can have up to 20 climbers in Behchokǫ̀.”

Dufor said the goal of the trip is to check out the facility and meet climbers in Behchokǫ̀, to share some tips and techniques with young climbers, and share the passion for climbing.

He also said there has been a lot of enthusiasm since he started promoting the trip and has already received more requests to join than he could accommodate.

“If there is a success, we hope to go again to bring different groups and climbers. The sky is the limit, you just have to make it happen. In the future, I’d love to have some kind of competition climbing there. That’s some stuff I’d love to see in the future.”

Dufor said he enjoys working with youth as they often overcome fears and gain confidence the more time they spend climbing.

“It’s a full body workout, the community is awesome and it involves a lot of problem solving,”

He said it is very rewarding to see young climbers work through getting stuck on the wall and finding ways to maneuver their way to the top.

“They get super excited and that’s the beauty of it.”

Blondin said she’s always excited to have people visit the community and see what it has to offer.

“Behchokǫ̀ is so lucky to be an hour down the road to allow this, but I’m pretty sure the people coming in have likely never been to Behchokǫ̀,” she said.

For Blondin, being able to provide recreational programming in her community has been very rewarding.

“I always say there’s sewer and roads to deal with, and that’s important, but you can’t forget about recreation.”

“It’s about sharing the love and letting people know there is a safe place to go…and it’s an encouraging environment.”

Blondin says during her one year contract she hopes to build and train a team of staff that will carry on good work in the community so there will continue to be quality programming in her community.