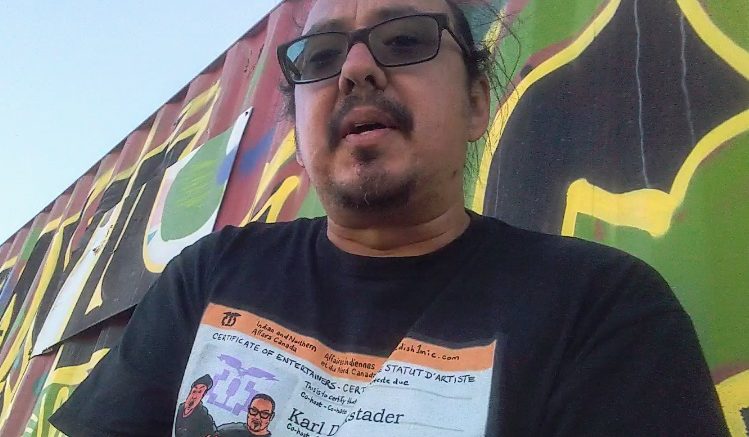 A screenshot of the video report Dockstader submitted to Twitter. (Photo courtesy of Karl Dockstader)

Karl Dockstader – Indigenous man, father and journalist – was arrested and charged for simply doing his job, he says.

Protestors have been occupying the McKenzie Meadows development in Caledonia, ON, for months, renaming it 1492 Land Back Lane.

Two court injunctions are in effect and prohibit anyone from being on the property, says Rodney Leclair, OPP spokesperson, in an email.

Leclair suggests the OPP has no role to play in the land issue but only to maintain public safety.

“I don’t think that it should be the OPP to make that determination between what is and isn’t journalism,” says Dockstader. 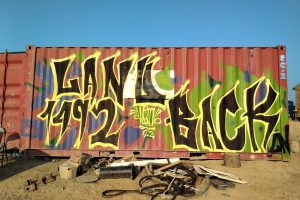 A cargo container with the words ‘Land Back 1492’ spray-painted over it. (Photo courtesy of Karl Dockstader)

Dockstader broke his silence over Twitter publishing his intimate account of the 1492 Land Back Lane protest called The Rabbit Dance.

After hearing about the police raids, Dockstader says he came to the event with the intention to cover police violence and the overall threat of police presence on the land.

“I believe this is a way of silencing me . . .  I don’t want to be silenced,” says Dockstader.

Dockstader explains the emotional experience of telling his young daughters about his recent arrest.

“I cried after I told them,” says Dockstader.

The OPP said in a statement that it was “committed to the freedom of the press” and “respects the important role” media plays.

“I – like the land defenders – am Ukwehu: we. We are the people original to these lands,” says Dockstader in The Rabbit Dance. “It was important for me to help tell this story from a perspective different from the way legacy media was telling it. I have never gone to this land action for the purpose of extracting a story, I am there to give narrative sovereignty to a people who have been the subject of too many one-sided tales.”

After posting a video on Twitter Aug. 29., explaining the events of the day, Dockstader admitted to playing lacrosse with some of the protesters.

Dockstader believes that video may have led to his arrest; he was charged with mischief and failure to comply with a court order, shortly after on Sept. 2.

Dockstader says the OPP asked him to come to the police department over email and turn himself and any supporting evidence in with him.

“Engaging in activities outside of their reporting purpose, could subject media personnel to charges,” says Leclair in an email.

He understood that as a journalist he couldn’t actively assist the land defenders and that his media title would protect him.

The CAJ and the Canadian Journalists for Free Expression issued a statement calling for the OPP to drop the charges.

Chief Mark Hill of Six Nations calls the events at 1492 Land Back Lane a “crisis” in a video posted Sept. 8.

Leclair confirms a total of 21 people since the police raid on Aug. 5. have been arrested.

Six Nations community members and the government are trying to arrange a meeting to discuss the issues, in an effort towards a peaceful resolution, says Leclair in an email.

Dockstader hopes they realize it was just a clerical error… that they made a mistake and that they drop the charges.