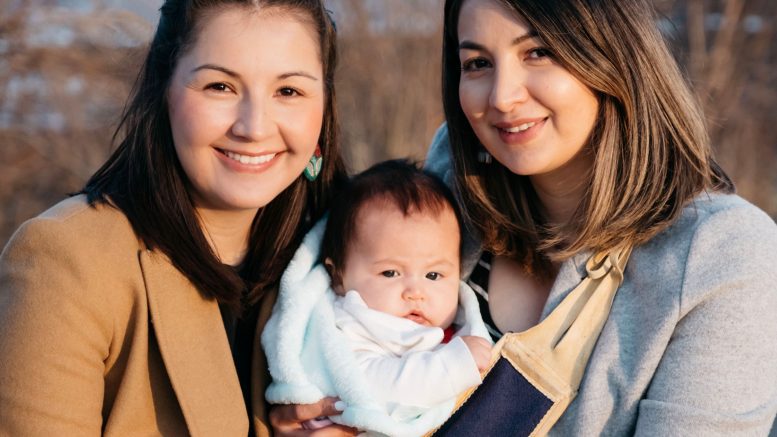 For years, Mahalia Yakeleya Newmark and her sister Kalina Newmark discussed ways to honour the lives of their great aunt Mary Lennie and cousin Mariella Lennie who were murdered.

The pair wanted to do something to capture the beauty and resilience of their relatives as well as all the Murdered and Missing Indigenous Women and Girls across the North.

After consideration, Yakeleya Newmark along with the help of her sister and five volunteers decided on a public art project called Strong People, Strong Communities.

“I really think that art can be a very powerful vehicle for expression of messaging — sometimes in ways that we can’t say through words,” she says. “There’s so much art that’s been made by Indigenous artists… On issues that impact our communities whether its Missing and Murdered Indigenous Women and Girls, climate change, police brutality.”

The mural painting project will bring eight to 12 Indigenous artists as well as 12 youth to collaborate on six murals across Yellowknife, Ndilǫ and Dettah — all artists and participants will be paid.

“I think it’s an incredible opportunity for youth to learn artistic skills but to also have an opportunity to really express themselves and to really think about the things that are important in their lives and in their communities,” she explains. “So it’s more than just learning about art, it’s about working together and also being role models.”

Yakeleya Newmark says the project will also aim to change the narrative she feels is pushed about Indigenous peoples in the media.

“We are so much more than having experiences of trauma, or the historical experiences of colonization and of racism,” she says, “we have so much to offer in terms of our culture and our beauty and our excellence.”

Art in a pandemic

Yakeleya Newmark credits the City of Yellowknife for being an early supporter of the project. The city identified the mural project as an opportunity at a reconciliation engagement survey last summer.

The Strong People, Strong Communities Mural Project was initially planned to launch this summer and was nearly cancelled as a result of the COVID-19 pandemic.

“There was a moment where I really considered letting this go, but I really believe in the project,” she says.

The project is going ahead with plans to complete the murals next summer, the application deadline is Aug. 19 for youth aged 16 to 25.

Yakeleya Newmark says she is still looking for sites for the murals to be painted in Yellowknife, Ndilǫ and Dettah — any businesses interested can contact Strong People, Strong Communities.