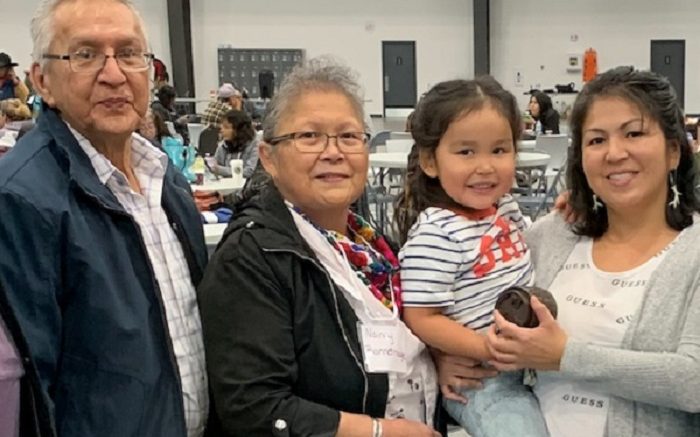 When Deh Gah Got’ie First Nation Chief Joachim Bonnetrouge was four years old, an Elder taught him how to set a net to catch ptarmigan.

This was an important moment in his life and serves as a story which will now be passed down in the form of a children’s book written in both English and Dene Zhatie.

Ehdaro: Denelı̨a dı̨ı̨ meghayé, łıé dzę meghǫ́t’ǫh (Big Point: A Day in the Life of a Four Year Old Dene Boy) was a community collaboration, written by Bonnetrouge and his daughter Karalyn Menicoche. Local Fort Providence artist Cynthia Landry contributed with drawings and Doris Camsell was in charge of the translations.

The book tells the story of one day in the life of a Dene boy growing up in the Northwest Territories along the banks of the Dehcho.

“Part of Dene culture is the whole notion of passing on longtime stories,” Bonnetrouge says, “trying to make that connection with young people.”

Menicoche adds the book is particularly important as not a lot of Dene stories are recorded on pages.

“Most of our stories are not written because were oral and very visual,” she says.

In addition to passing on important stories to youth, Ehdaro serves as a language revitalization project.

“The importance of having a story in Dene Zhatie and in English is for the children,” Menicoche explains, “so they can hear Dene Zhatie and associate [it] with the pictures in the book.”

The book was part of a project launched by TakingItGlobal and Connected North, two organizations focused on education.

“This collaboration enhances Dene Zhatie language revitalization efforts and offers an additional resource involving language keepers, Elders, artists and members of the community with acknowledgment of past, present and future stories,” says Jennifer Corriero, executive director at TakingItGlobal, in a press release.

Menicoche says the project has been in the works since the fall of 2019 and both her and her father are happy with what they accomplished.

The official book launch for Ehdaro will take place on July 29, featuring opening remarks from community Elders, a read aloud as well as an author question and answer period.

As a result of COVID-19, the event has a limit on guests, but those interested can watch online.