After spending the past couple months working on commissions, Dene artist Darrell Chocolate was able to publicly showcase his work at the Yellowknife Farmers Market.

The Yellowknife Farmers Market (YKFM) kicked off its summer season on Tuesday, July 7, after a hiatus as a result of the COVID-19 pandemic.

The return is appreciated by patrons and vendors alike, as farmers markets present one of the best opportunities for local artists to show off their work, says Julie Downes YKFM Manager.

“They get a lot of foot traffic,” Downes says. “For Darrell Chocolate, his thing was to kind of showcase his art.”

The day after setting up a vending table at the YKFM, Chocolate noticed an uptick in his website’s traffic.

“It kinda boosted my website, cause you go on Google analytics, you can see my name googled more now,” he says.

Chocolate says he enjoyed spending two hours selling his work, where he had an opportunity to hear feedback from the public and share business cards.

Painting in a pandemic 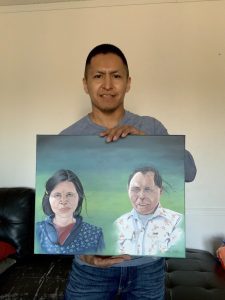 Chocolate says painting kept him busy during the pandemic, and he realizes he isn’t the only one using art to pass the time.

With the lockdown offering amateur artists more time to pursue their hobby, Chocolate has one piece of advice — “Just be creative.”

Chocolate, who grew up in Gamètì, says he typically paints portraits and landscapes and gets his inspiration from what he sees around him.

“My inspiration comes from the North, the beauty of the North,” he says. “When you look at the sunsets here, you can see the yellow, orange sunset haze in the sky, in the horizon.”

The Farmers Market was put on hold through the month of June, but with the NWT in Phase 2 of the Emerging Wisely Plan, stalls will be set up at Somba K’e Civic Plaza every Tuesday until Sept. 8.

Downes says going forward the YKFM has received approval to increase the number of patrons onsite from 75 to around 125 at a time.

It’s t-minus ONE HOUR until the YKFM opens for its 2020 summer season!

Here are some tips and tricks to help keep the…

Chocolate will be selling his paintings at the YKFM again on Aug. 4.