Police arrested a 25-year-old man in Yellowknife during a drug investigation that took place on the Circle K parking lot located on Forrest Drive.

According to an RCMP news release, on Friday, April 24,  an officer was on patrol when he spotted a potential drug deal happening.

“A search of the man’s vehicle subsequent to his arrest led to the seizure of approximately 95 grams of cocaine,” Julie Plourde, an RCMP spokesperson said.

Currently there is a increased police presence outside of Circle K in Yellowknife. Update to follow-ArtCGreen

CKLB Radio was on the scene for the arrest as police searched a full-size black pickup truck parked next to the gas station.

Police say they then got a search warrant for the man’s home in Yellowknife.

While searching the home, officers discovered Canadian and US currency totaling $50,000, a small number of magic mushrooms and three pounds of marijuana were also confiscated. Along with cannabis resin, it is also known as shatter on the street.

Kyle Ormiston, 25, has been charged with the following offences: 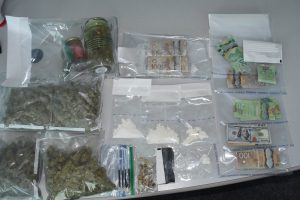 (Photo courtesy of the RCMP.)

Ormiston was brought before a Justice of the Peace and was released for court on August 18.