The Chief Public Health Officer of the Northwest Territories Dr. Kami Kandola will be issuing a new public health order banning all indoor gatherings and restricting those outdoors.

Under the order, residents will not be allowed to host friends or family who do not live with them in their home.

If you absolutely wanted to get together, then Dr. Kandola says you should do so outside. However, the order restricts outdoor gatherings to fewer than 10 people and you must maintain physical distance at 2 meters apart.

“If you are on the land, a tent or cabin is the same as your house, no visitors from outside your household,” said Dr. Kandola at a news conference on Friday afternoon.

The order will kick in at noon on Saturday, April 11, just in time for the Easter bunny.

“For this weekend … We would be providing warnings and education if there are any complaints,” said Dr. Kandola. “Typically when it comes to the public, we look at the risk and we look at providing education.”

There are some exemptions to the gatherings order.

Dr. Kandola touched on a few: residents who have a pipe burst or need some electrical work done will be allowed to have someone over to fix the problem; daycares and dayhome operators will be allowed to continue; children and youth in families with shared custody won’t be forced to pick a home.

Businesses in the red, green and yellow

The territorial government has colour-coded business types on whether they can remain open from now on.

Those in the red (forced to close) include: tour operators, bottle depots, gyms, museums and galleries, bars, theatres, dine-in restaurants, and personal service establishments like massage therapists and hair salons.

Several of these have been closed for weeks since Dr. Kandola issued a recommendation these businesses close down. Now if in contravention, businesses can face a fine of up to $50,000 under the order.

Other businesses like grocery stores, gas stations, banks and pharmacies are considered essential (green) and will remain open. Liquor stores, while not officially considered essential, will also stay open. (Earlier this week the GNWT explained its reasoning.)

There is also a yellow area for restaurants where Dr. Kandola said those that can only offer take-out, drive-thru or delivery can stay open.

“I have been impressed with our business community’s response to COVID-19,” she said. 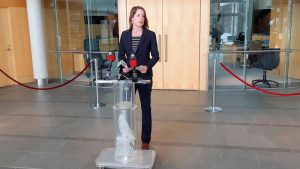 While the above order on gatherings and businesses will only come into force on Saturday, a second order regulating measures at remote worksites kicked in on Friday.

Workers leaving the site must practice physical distancing for 14 days before returning to work and report symptoms if they arise.

Employers now have several regulations to abide by including health screening, ensure social distancing, and, notably, they must “use the absolute minimum amount of workers to continue operations.”

CKLB asked how the order would be monitored at the sites and Dr. Kandola said her office is working with the Workers’ Safety and Compensation Commission. She added that her office would only get involved if called upon by WSCC, including the government’s new enforcement taskforce.

However, Industry, Tourism and Investment Minister Katrina Nokleby still encouraged workers, and all residents, to call out and report their colleagues if they see them contravening the orders.

“I’m a firm believer in public shaming,” she said. “It’s not a great feeling, we’re not like that as northerners, however I think that’s the state we’re at.”


Funds will be distributed to northern non-profits across the territory.

No more active cases of COVID-19 in NWT