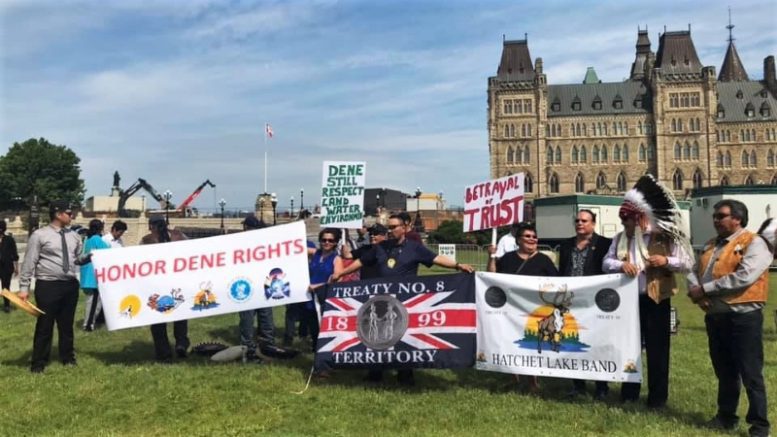 Members from the Athabasca Denesuliné communities gathered on Parliament Hill on June 18 to call on CIRNAC Minister Carolyn Bennett to continue negotiations on an out-of-court settlement and land claim. (Photo retrieved from Facebook).

Today is the first of a two-day mediation session to try and get the federal government back to the negotiation table with the Athabasca Denesuliné.

If mediation doesn’t work then Minister Carolyn Bennett, of Crown-Indigenous Relations and Northern Affairs Canada (CIRNAC), will need to answer to the courts.

Robillard, who’s at the table since 2001, says the ministry unexpectedly stopped negotiations in mid-June on an out-of-court settlement that has been 19 years in the making.

That settlement stems from a court case launched in 1991 to have their treaty rights recognized with lands extending into the Northwest Territories and what is now Nunavut.

According to Robillard, Minister Bennett justified the decision by saying her ministry needed more consultation with Indigenous people in the N.W.T.

That decision apparently came after local First Nations were concerned with the negotiation process. As reported by the CBC, Yellowknives Dene First Nation Chief Edward Sangris has said the Athabasca Denesuliné wouldn’t meet with YKDFN leadership, but Robillard said his organization was simply following the process by communicating through negotiators.

CKLB reached out to CIRNAC last Friday for more information on the decision to stop negotiations. After following up on Tuesday, we were told the ministry was drafting a response.

Robillard said negotiations were also in the final stages for a land claim that spans northern Saskatchewan, Manitoba, the south-east of the N.W.T, and south-west of Nunavut.

Representatives from the Dene communities of Lac Brochet and Tadoule Lake in Manitoba are also part of the negotiations.

The N.W.T portion would, of course, overlap with the ongoing Akaitcho land claim process, and Nunavut is a recognized land claim for Inuit.

According to Robillard, an overlap agreement was signed with Nunavut representatives and they’ve been at the negotiating table since 2007.

Without going into detail, Robillard explained the overlap agreement governs things like harvesting rights, resource management and even a settlement boundary in the area.

“Members are very disappointed right now,” Robillard told CKLB. “It’s no an easy task when you’re negotiating with the government, especially when you’re dealing with treaty rights… The government isn’t going to give you everything immediately, it’s a long process.”

He added that the elders who have been part of the process since the beginning in 2000 were excited.

“They thought they were going to see this agreement become a reality.”

The mediation session will last for the next two days.

Earlier this month, the Athabasca Denesuliné filed an application for judicial review if mediation is unsuccessful.

For now, Robillard said, “We’re hopeful we can turn things around and get back to the negotiating table so that we can wrap this up.”

YKDFN satisfied after meeting with feds on Giant Mine apology, compensation