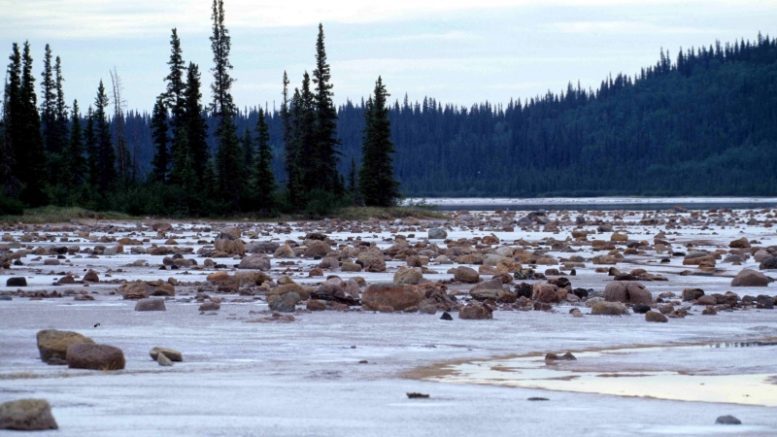 Photo taken by Ansgar Walk and retrieved from Wikimedia Commons.

According to a Canadian Press story picked up by multiple Canadian news outlets, “the park’s status could be endangered because of impacts from hydro development in British Columbia and dozens of oilsands projects in Alberta — including one planned for 30 kilometres from the park.”

Those comments were made at a UNESCO’s 43rd World Heritage Committee  meeting in Azerbaijan this week.

A few weeks ago, Canada received a slap on the wrist from the organization saying its conservation efforts for the park weren’t good enough.

The CP story notes, “A report on the park a year ago found that 15 out of 17 measures of ecological health were declining, mostly due to decreasing water flows. Area First Nations say their right to a traditional lifestyle is being harmed because they can no longer reach much of their territory.”

One of the park’s profile pages on UNESCO’s website shows a series of threats, including mining, oil and gas exploration, British Columbia’s Site C dam, and a lack of engagement with Indigenous people, among others.

UNESCO has called on Canada to report on the effects of these developments on the park and has delayed the deadline until December 2020.

The Northwest Territories’ chapter of the Canadian Parks and Wilderness Society, along with a host of other partners, including environmental and Indigenous groups, called on Canada to carry out the report as well.

That was one of five demands the groups had. Others included establishing better water management systems and returning water to the park to ensure its health, invest in better monitoring in the Peace-Athabasca region, and prevent further degradation due to oilsand tailings.

Melody Lepine is the director of Mikisew First Nation, which pushed for UNESCO’s review in the park five years ago.

She also attended the meeting in Azerbaijan. In the news release, she said he hoped UNESCO’s decision would be a “wake up call for Canada” to work with local Indigenous communities to protect the park.