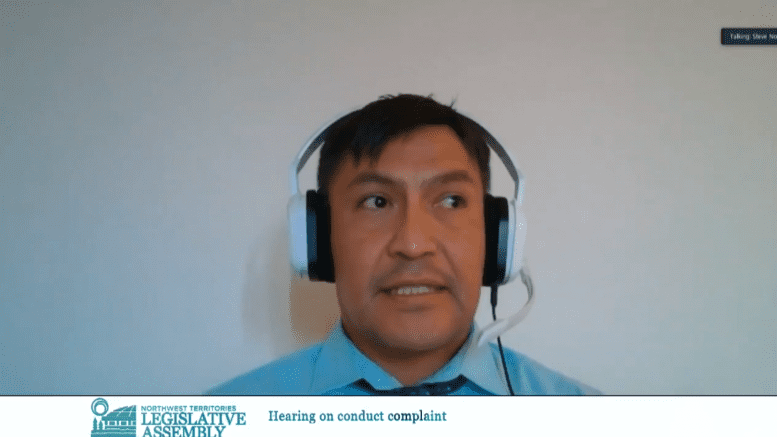 The hearing into a conduct complaint against MLA Steve Norn was delayed Friday due to a COVID-19 exposure at the Legislative Assembly.

Prior to the delay, Norn continued his testimony, this time responding to comments he made earlier in the hearing.

On Tuesday, Norn made several comments throughout the proceedings.

After adjudicator Ronald Barclay decided to go ahead with the hearing, Norn called it a “legal farce.”

He also told Maurice Laprairie, the adjudicator’s lawyer, “I don’t want to hear your voice,” and “you’re very good at interrupting, Mr. Laprairie,”  among others.

During Ollie Williams’ testimony, Norn interrupted in the chat calling him a “liar.”

On Friday, Norn said the outbursts were caused by stress at having two family members currently battling COVID-19.

“At the time I felt like I needed some time away from this whole process because I want to look after my family and I just felt that I wasn’t given the opportunity,” he said.

He also apologized to Barclay and Laprairie.

“It felt like I was under attack,” Norn later added. “It felt unjust at the time, but looking back now, everybody was just doing their jobs.”

Update Oct. 13: A previous version of this story said the hearing would resume on Oct. 15. Ronald Barclay, the sole adjudicator, has since decided to delay the proceedings indefinitely, due to the COVID-19 outbreak at the Legislative Assembly.