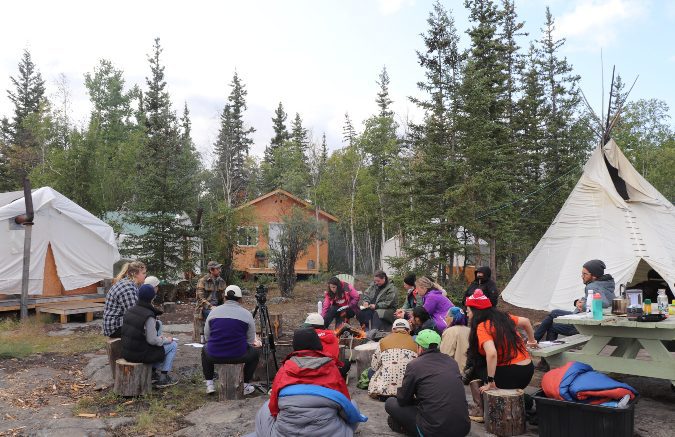 The Young Leaders Summit on Northern Climate Change hosted by Ecology North took place from August 17-21. 17 participants from the Yukon, Nunavut and the Northwest Territories gathered in Dettah at B. Dene Adventures tour camp.

The goal of the camp is to bring northern perspectives together in one place in order for each participant to learn from one another. 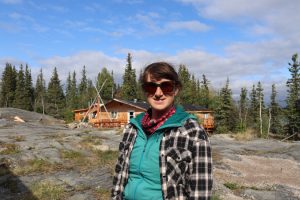 “The goal is to learn more about climate change and how to take action during a time of climate crisis…I hope that participants take away connections and networks that they can draw on in the future,” says Dawn Tremblay. As the executive director of Ecology North, she  hopes that participants go back to their communities with inspiration to take action.

Another organizer, Richelle Castillo, is the project officer event planner at Ecology North.

“Experiences of people from Cambridge Bay are not the same as experiences that we have here in Yellowknife. Hearing about them and learning about them is important for us as fellow Northerners. ” says Castillo. 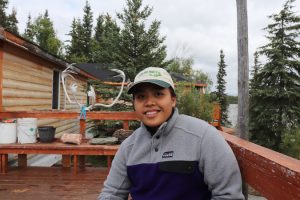 CKLB got interviews from the participants, as well as being able to be at the camp for part of it.

Most participants heard about the summit on social media or through their workplaces. All are passionate about climate change, but a few have the feeling of being forced to care about climate change. Joshua Komangapik, 27, from Iqaluit is one of those youth. He works as the park management planner for Parks Canada.

“In the Arctic we are subject to its impacts, two to four times greater than those of lower latitudes and so we live in the reality of climate change. It affects all aspects of our lives. So I have no choice but to have it be important to me,” says Komangapik. 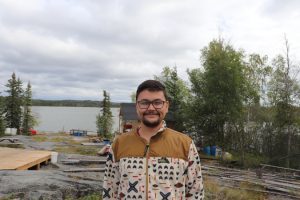 He would like to see more community based programs that would document the impacts of climate change such as sea ice monitoring and food security.

“There needs to be a collaborative approach where people respect the livelihoods of other people other than their own. And to be able to work together to tackle this challenge involves us not being an individualistic society, but a collective one.”

The people of Nunavut are seeing the impact of climate change faster than elsewhere with rapidly melting ice that makes it dangerous to travel, to harvest food for their families, and essentially their way of life. Lena Korgak-Stokes, 22, from Iqaluit works as the Nunavut Climate Change Secretariat and is the lead on putting together a Climate Change Youth Advisory Committee.

“I lost a lot of my ways of life due to colonialism and a big part of my life has been trying to get those ways back,” she says. “I’ve just started living it the way I’ve dreamed about for so long, and now it’s threatened again due to climate change.” 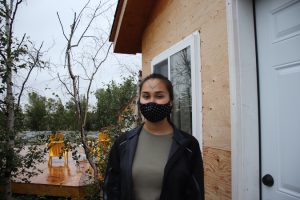 She adds, “Back home, we have a mining industry and people are (saying) we don’t want it, but no one’s listening.” She wonders if there could be more sustainable solutions or training for extraction.

Meesha Wittkopf, 25, from Marsh Lake, Yukon, of settler descent. Wittkopf ’s background is in food security, where she studied at Yukon University in the climate change policy program. Originally from Alberta, she recognizes her complicated family ties to the oil and mining industry.

“My passion is food security and looking long term,” she says. “You know, we do still have the roads where you can bring in (food), but what happens when the permafrost melts, and the roads getting into these communities are destroyed? Are we just going to leave a whole community without food?” says Wittkopf. 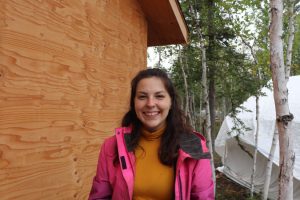 Wittkopf has seen the impacts of climate change in her community such as water levels rising, heat waves and wildfires.

“As the rivers rise, it changes the pattern of flow, and the erosion which impacts the fish that come through. Climate change will directly impact traditional food sources.“

Wittkopf is frustrated by elected officials talking about how the young people are going to be the ones to make change when climate change is a big issue.

“It makes me angry because climate change has been a problem…we’ve been talking about this for the past 30 years. Why do we need to wait until I get hired to be in a position that I can say, ‘You know what, this is not right’.”

Reegan Jungkind, 19, is of settler descent from Hay River is a student at University of Alberta studying political science and sociology, as well as having certificates in sustainability, globalization and governance.

Jungkind has seen rising and severely low water levels in her community in recent years. She would like to see better food security, better waste management, a compost program as well as a more accessible recycling program in her community.

She also learned about leadership while at the camp. 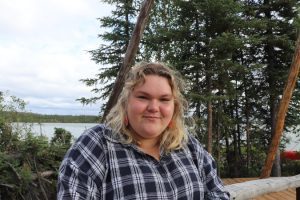 Using leftover arsenic at Giant Mine as an example, Jungkind says improvements are needed in the extraction industry to reduce waste and byproducts.

However, when asked about Indigenous groups partaking in extraction she felt that’s the best way to do so.

“They have a better connection and a better understanding of the land. It’s literally just facts. They’ve lived here for thousands of years ahead of settlers.”

Jungkind wants people in positions of power to listen to the youth now more than ever.

Siku Rojas, 19, from Iqaluit also spoke about the conflict of Indigenous communities relying on extraction.

Rojas has lived in Iqaluit all their life and acknowledges that jobs are limited, and as a result the community relies on mining and construction to feed their families “even though it contradicts their lifestyle of hunting and living off the land.” 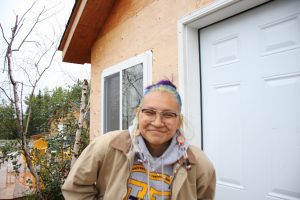 They add,” It can be a very hard and mentally draining for Indigenous people in the North.”

“But ultimately, you have to be okay with it or you have to find a way to support it because we are living in a colonial state that is forcing Indigenous people to depend on the economy… in the long run, it’s not going to save us and it’s going to destroy us even more,” says Rojas.

Many of the participants believed extraction is a colonial practice and that the minerals and oil should be kept in the earth, or new policies and practices be put into place for the health of the planet.

Nika Silverfox-Young, 26, from Little Salmon Carmacks First Nation, Yukon, is studying northern conservation and environmental sciences at Yukon University, and is a fellow from the Yukon First Nations Climate Action Fellowship, where she heard about the summit.

Saving the salmon is her top priority; her community is seeing a lack of salmon and what does come is smaller than ever. 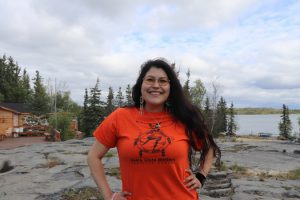 “It’s upsetting because I truly believe we’re connected through salmon. Salmon are our lifeblood, they’re keystone species in the Yukon. If we lose them, we are so screwed, this is what extinction looks like.”

Reclaiming her roots, she identifies as a Northern Tutchone woman and is on the journey of reconnecting back to the land and her language.

“I feel like the most rich knowledge you can have is your own language and your own culture. It’s richer than any PhD.” 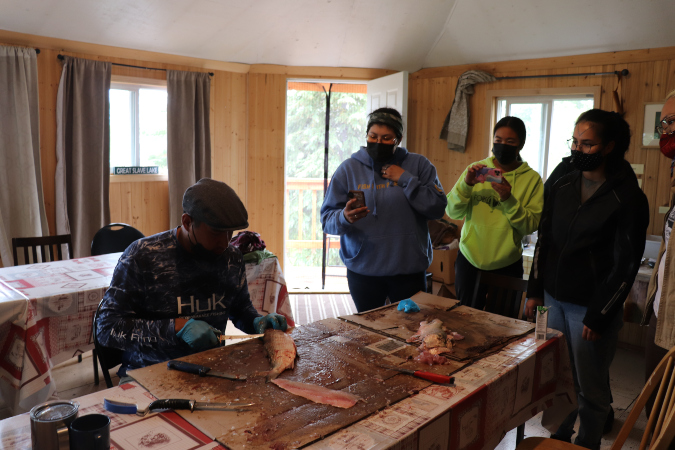 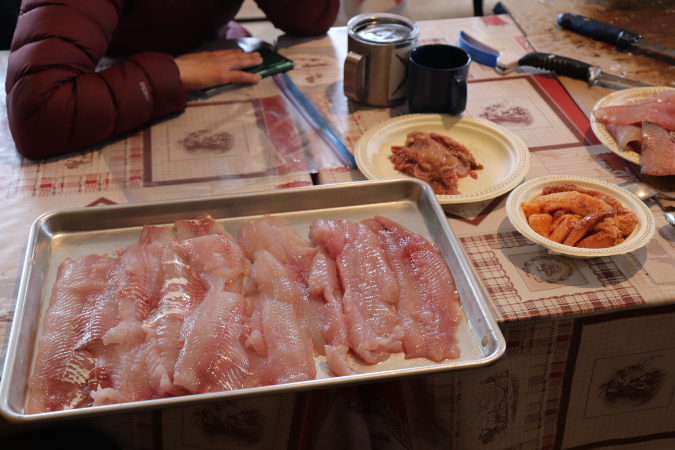 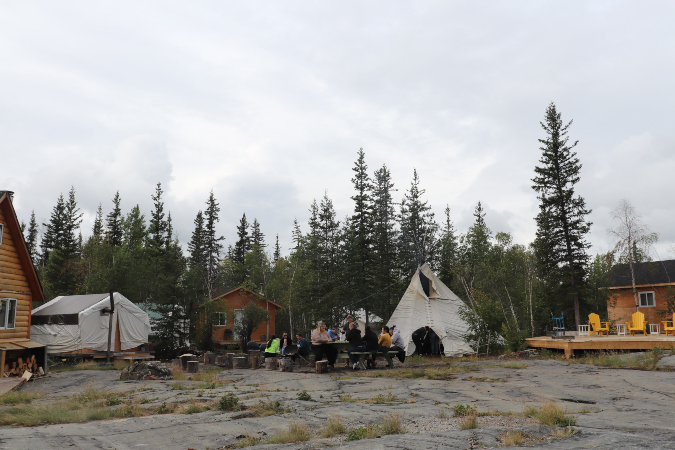 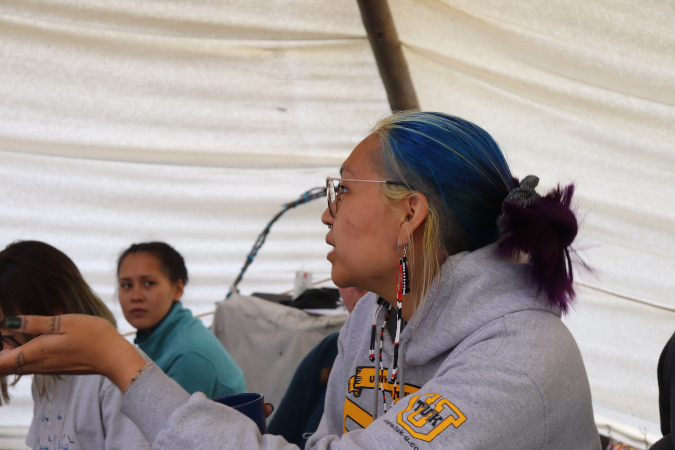 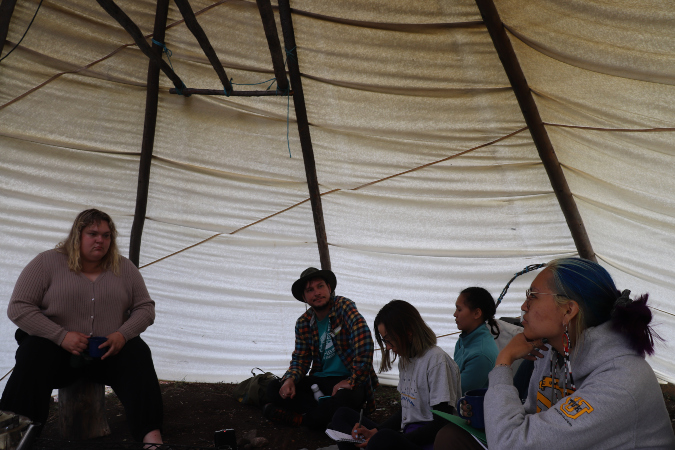 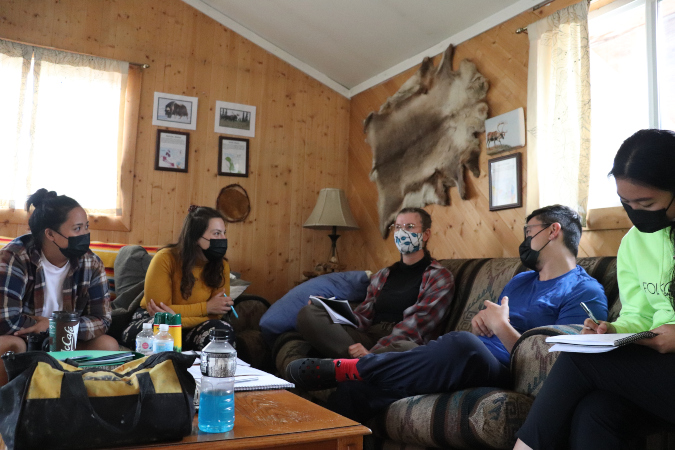 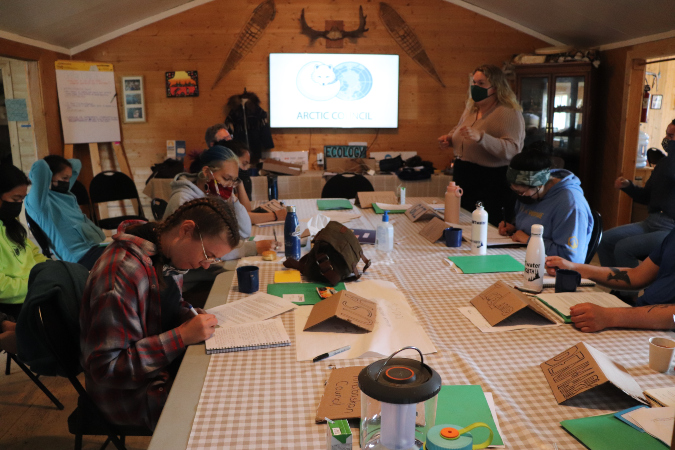 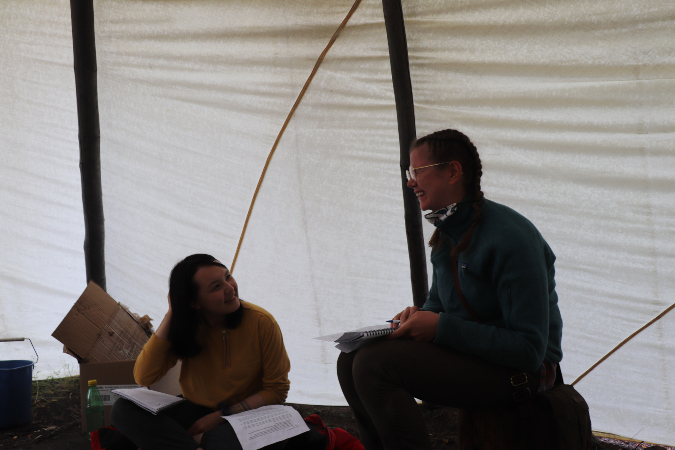 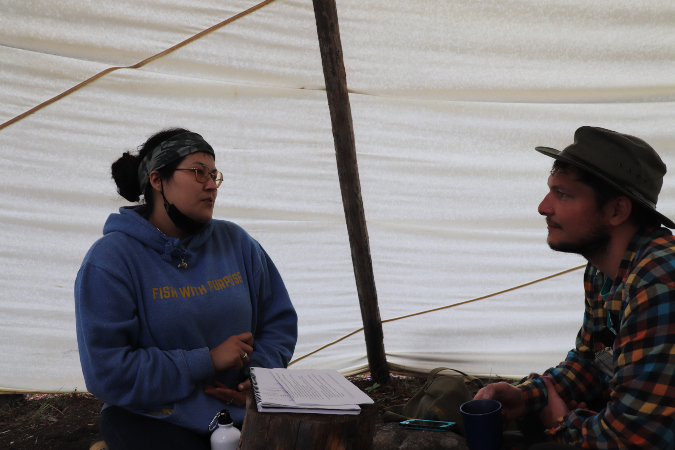 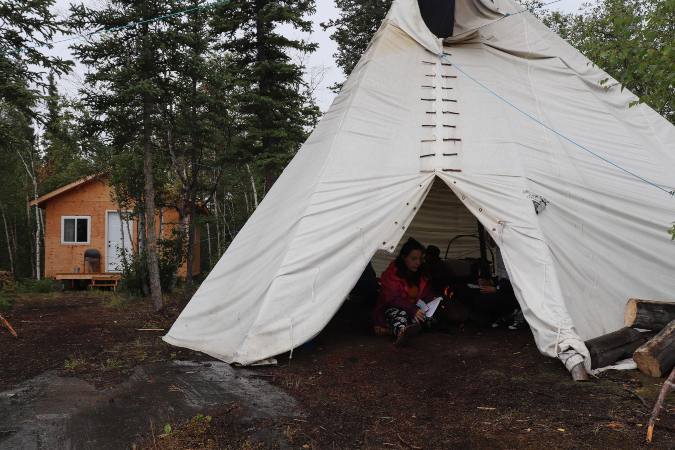 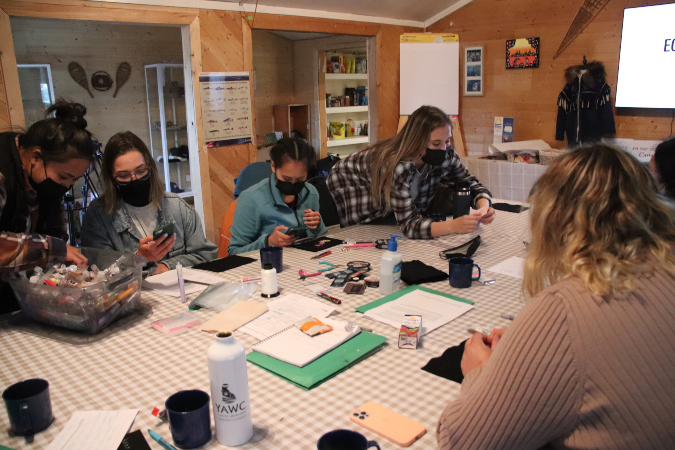 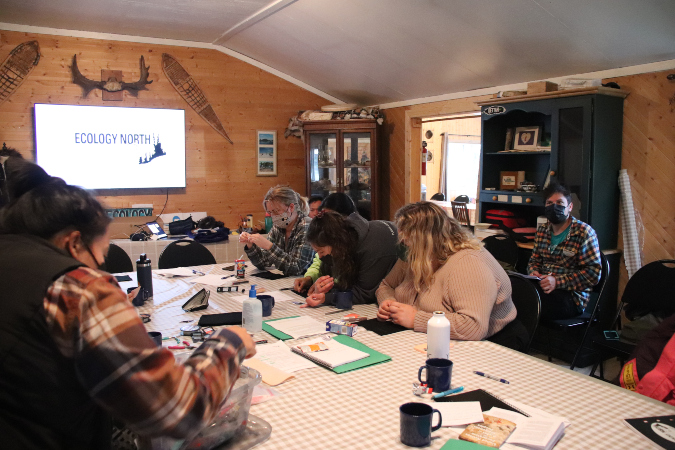