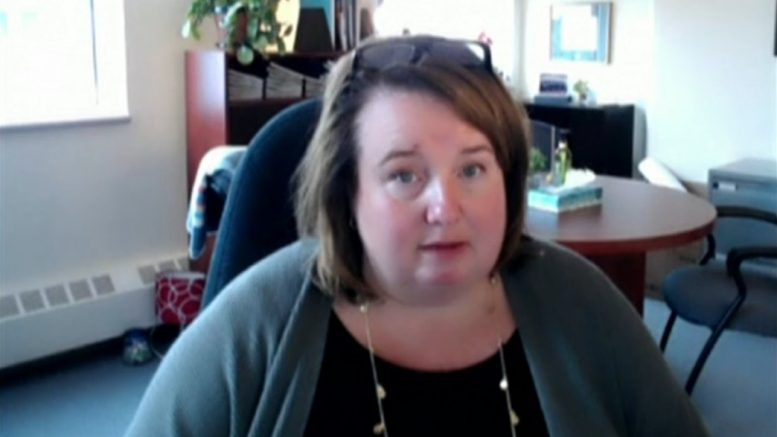 Riles is the CEO of the Northwest Territories Health and Social Services Authority (NTHSSA).

On Wednesday morning, she told reporters the health care system was not yet overwhelmed but that NTHSSA would be implementing new measures to meet demand in case of increased hospitalizations due to COVID-19.

Those include increasing the number of intensive care beds from four to six, sending some patients to long-term care facilities to increase available beds at Stanton hospital, and cancelling or delaying elective surgeries.

Riles said NTHSSA’s pandemic plan still has the ability to adapt and increase capacity if needed. However, that would require additional staff, “which is always going to be our limiting factor,” he added.

Asked about the possibility of sending COVID patients to Alberta, Riles said that has not yet been necessary in the current outbreak but reiterated that referrals are usually only for services that can’t be had in the territory.

She added that Alberta health officials have reassured the NWT that residents needing medical care will be given the same priority as Alberta patients.

Premier Caroline Cochrane, Health Minister Julie Green, Chief Public Health Officer Dr. Kami Kandola and Riles all called on residents to get vaccinated if they are able to do so to try and contain the spread of the virus.

The restrictions limit gatherings to:

The restrictions will last a minimum of 14 days, and begin on Wednesday at 5 p.m.

Health officials are also recommending against non-essential travel in and out of the communities.

Schools will remain open as they already have mitigation protocols like masking, distancing and limited exposure opportunities, said Kandola. She added that the restrictions on extracurricular activities was to avoid the mixing of different schools together.

CKLB asked about residents going out on the land during the restrictions.

“Going out on the land, if it’s feasible, is a good way of waiting out the isolation period,” said Kandola.

However, she urged only people who are low-risk and have not been exposed to COVID should go on the land.

“The big concern is that there are high risk people who have been exposed to COVID and if they’re out in the land, and they need medical attention, it’s that much more difficult to reach them,” she said.

Tuesday evening, Kandola declared an outbreak among Yellowknife’s street-involved population as there have been 19 confirmed cases since mid-August.

Health officials have set up a dedicated isolation centre for people experiencing homelessness that have been diagnosed with COVID-19 and their contacts, according to NTHSSA spokesperson David Maguire.

He added that public health has offered vaccination to these individuals at the isolation centre.

“We have a team of outreach nurses who work with local shelter populations and regularly offer vaccines as part of their interactions,” he said in an email. “We have asked all health care providers to continue to actively offer vaccine education and the shot itself at all appointments.”

CKLB recently wrote about the ongoing search for additional shelter space in Yellowknife. During the news conference, Green said her department received three proposals for a temporary shelter location, and that it was seriously considering one of them. She did not say where the location was, but said the department would work to have the space open in the next four to six weeks.

“There are shelter services, but they are thin,” said Green.

The downtown day shelter and sobering centre has had limited 25-person capacity for over a year.