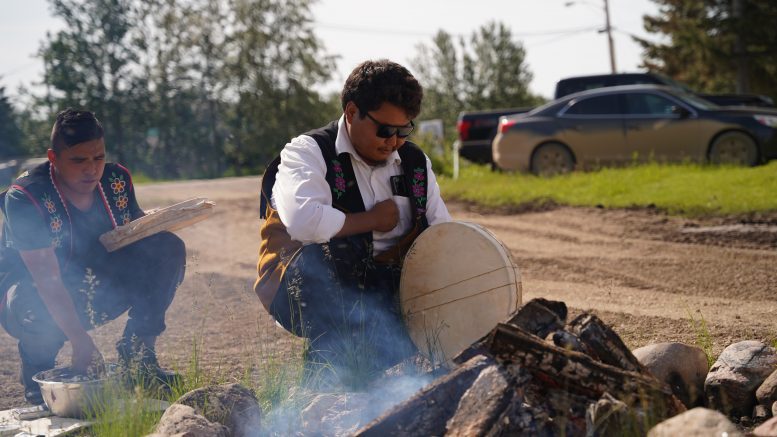 The small Dehcho community of West Point First Nation had big names in attendance for the beginning of Treaty 11 commemorations.

“This is a very special time for us and our community that we can have this time to come together with one another and share stories and do a little bit of the traditional fish production and stuff like that, that we used to do as a community,” Grand Chief Cayen said. 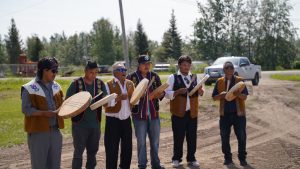 Warm sunny weather greeted the dozen or so attendees, along with a flock of pelicans that amazed the crowd by flying circles around the fire as Deh Gáh Got’îê drummers conducted a prayer.

Karen Felker, one of the organizers, described the moment as emotional.

“Seeing them come around when they played that, it almost brought tears to my eyes,” she said.

One of the drummers, Walter Landry, talked about the importance of the event to commemorate those who came before him. 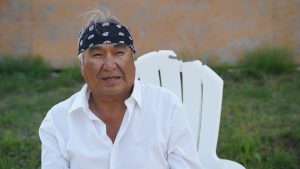 Walter Landry is a member of the Deh Gáh Got’îê drummers. (Photo by Luke Carroll/ CKLB.).

“We’re bringing the ceremonies back,” he said. “It’s to remember them, to remember the ones that passed on before us, it’s like they’re with us today.”

The event had speeches by several prominent figures across the territory, including Dene National Chief Norman Yakeleya.

“This is a significant historical commemoration, reminding ourselves of the sacred treaty agreement with the Government of Canada, and to commemorate what our Elders have said to us,” he said.

However, National Chief Yakeleya also spoke of the issues that came with the treaty.

“The federal government had a misinterpretation as to the treaty, now is our opportunity to set the record straight,” he said. “We’ve lost a lot of things in terms of the Indian Act Policy, the residential school policy, health, economic means, language and culture. What was lost basically, was who we are as Dene people.”

William Michel, an Elder from the community, also spoke about what was lost. 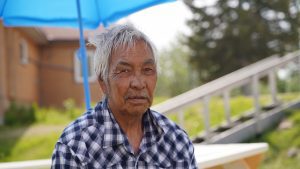 “According to the Elders, it was supposed to be a peace treaty, so non-Natives could come mingle with us,” he said. “But in later years they took more control of our lands, that’s what the Elders are saying about it now.”

“There’s no going back, we’re here. And so how do we honor that treaty, while we’re here?” Simpson said in his speech.

Hay River Mayor Kandis Jameson also spoke at the event about the need for governments to honour the agreement.

“You look around us now, with what’s happening on our planet, if we had listened from the beginning, we wouldn’t be where we are now. And hopefully, it’s not too late,” Jameson said.

A new Grand Chief in town 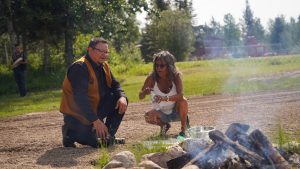 Grand Chief Cayen served as the West Point First Nation Chief until a few weeks ago.

He says the new position has added responsibility, but being a young person he plans to learn as much as possible from Elders across the Dehcho.

“I’m hoping that they can invite me to their communities so I can sit with them and have tea and sit around their fire and learn,” he said.

Grand Chief Cayen said there are challenges facing the region and it will be his goal to ensure each community stays united while addressing them.

“Unity is what we need, because we have everybody going in different directions. And it seems like there’s a lot that’s been thrown at us all at once. So we’re going to work together and try to have a united voice on all the issues,” he said.

Felker says Cayen’s appointment makes is an exciting time to be in West Point First Nation.

“He’s got an open heart, open mind, and all good things will happen from now on,” she said. “The winds are blowing in the right direction, so I’m praying that things will be good for all of us.”

Events include stories from Elders, bow and arrow making workshops, canoe races and a fish fry.