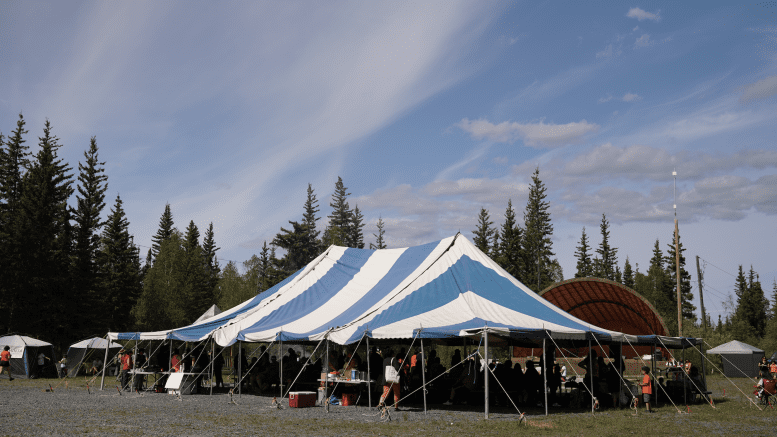 Hundreds gathered at Yellowknife River at the Wiilliideh site to celebrate Indigenous Peoples Day – an annual event that happens every June 21.

“It has been a long time since we gathered like this,” says Chief Ernest Betsina for Ndilǫ, Yellowknives Dene First Nation (YKDFN).

This year’s festivities were particularly special because residents got the chance to come together in a time of COVID-19 where things like traditional games, ceremonies and large gatherings were forbidden.

A fish fry, beading and face painting station were just some of the events, participants got to enjoy.

He also reminds both territorial and federal leaders that there is still time to build relationships with Indigneous communities.

In addition to attending the event, Betsina and his family celebrate Indigneous Day by harvesting the land, picking berries and “talking to the trees” among other things.

Fatt came out with his brothers to enjoy the day.

“I’m pretty excited as I didn’t expect to see so many people all at one time,” he said.

He describes it as a privilege to share the space with his community and the importance of coming together to share in this experience.

“It’s really nice to be able to come out here without having to worry about COVID too much,” he says.

Fatt took the day to enjoy the energy buzzing around the park, with his brother and dog by his side.

Donna Sheer is originally from Déline but now lives in Yellowknife.

“I think it’s important that we recognize and celebrate Indigenous people across this country,” she says, “I wanted to be part of that.”

On top of the celebration, Sheer was excited about the delicious fish and to see people out and about again.

“It just feels good being part of something,” she says. “It’s good to see people.”

With the recent discovery of the 215 children at Kamloops Indian Residential School, Sheer says the news triggered her and the stories her mother once told her came back – Sheer’s mother was a residential school survivor and has since passed on.

“Just never take for granted your community, your people, your language, everything,” she says. “Be proud of where you’re from, what you do, what you’ve learned, what you know.”

Celebrations kicked off at 2 p.m. with a fire-feeding ceremony and lasted until about 9 p.m., ending with a powerful drum dance.

The territorial government officially recognizes June 21 as Indigenous Peoples Day, opposed to Aboriginal Day, according to a press release earlier this month.