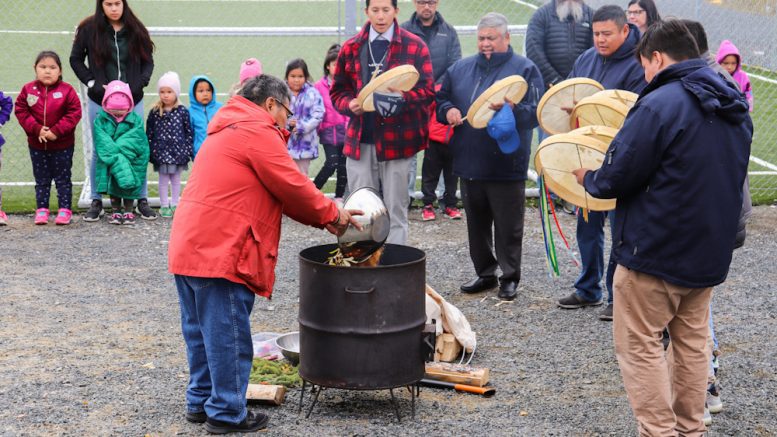 Moreover, residents in the NWT get an opportunity to show their pride, in a time of COVID-19 where things like celebrations and rituals are limited.

“This day recognizes a nation that withstood every weapon against the Dene and is still standing . . . that is why today is important,” says Dene National Chief Norman Yakeleya.

Here’s a list of some of the celebrations taking place in the NWT for Indigenous Peoples Day.

The celebration in Lı́ı́dlı̨ı̨ Kų́ę́ kicks off with a fire feeding ceremony at 10 a.m. at the Arbor.

A barbecue will be provided to residents around 11:30 p.m., followed by community games and events.

Some of the events include archery, sack races and a balloon fight.

The night is scheduled to wrap up around 8 p.m. with a drum dance by the Fort Simpson Drummers.

The day will start with an opening prayer around 1 p.m., followed by traditional games, a barbeque in the evening a  community movie night.

The band office is still unsure as to what movie will be chosen.

A community breakfast will be served between the hours of 9 a.m. and 12 p.m.

Residents are asked to bring their own plate, cup and utensils.

A fishing derby will be held between the hours of 11 a.m. and 2 p.m. – residents have the opportunity to win fishing gear.

Moose hair tufting, beadwork and face painting are just some of the cultural demonstrations taking place.

Johnny Landry will be playing live, starting at 3 p.m.

Other cultural events such as canoe racing and fish cooking begin in the afternoon from 2 p.m. to 6 p.m., followed by a large community feast and drum dance ceremony in the evening.

The Town of Inuvik will be hosting a drive-by barbecue in celebration of Indigenous Peoples Day.

“We gather to visit with family, friends and eat good food,” reads the community Facebook notice.

Fish fry, fry potatoes, hamburgers and hot dogs will be available to all residents.

The celebration will take place at 12 a.m. outside the Midnight Sun Complex.

The Hamlet of Aklavik will be hosting a take-out barbecue in honour of Indigenous Peoples Day.

The event will take place at Sittichinli Complex at 2 p.m.

Potato salad, burgers, hot dogs and pork chops are some of the items on the menu.

In addition, the hamlet of Aklavik office will be closed for the day.

The City of Yellowknife has no official celebrations for Indigenous Peoples Day.

Alison Harrower is a spokesperson for the city.

The City in previous years has supported the North Slave Métis Alliance and YKDFN, during its celebrations.

Celebrations will kick off at the Wiiliideh site at 2 p.m.

A fire feeding ceremony and traditional games will take place throughout the day until about 9 p.m. and a cookout will be provided by YKDFN.

The community of Colville Lake is preparing a cookout around noon in the middle of the community in celebration of Indigenous Peoples Day.

Skeet shooting, a canoe race, relay race and axe throwing are just some of the activities that will also be provided.

All residents are welcome to a full day of activities provided by Kátł’odeeche First Nation (KFN).

Dene Games, live music, a fish fry station, drum dances, and a special tea dance to honour the children discovered at Kamloops Indian  Residential School will be some of the activities provided at the event, according to a Facebook post by KFN.

The celebration will begin at the Dene Wellness Centre and work its way down to the arbour and teepees.

The Town of Fort Smith is hosting a community barbecue at the McPherson Park (beside the arena) between 12 a.m. and 4 p.m.

Each child under the age of 12 will also get a ballot for the chance to win a bike.

In addition, Gerald Poitras will be dj-ing for a few hours during the event.

The community of Enterprise will also not be participating in Indigneous Day festivities due to a staff shortage.

This is according to Senior administrative officer (SAO), Tammy Neal.

National Indigneous Day kicks off at the Cross at 1 p.m.

Checkers, bannock making and spear throwing are just some of the traditional games taking place at the event.

This event is hosted by the Tłı̨chǫ Government.

The community of Gamètì will not be celebrating Indigneous Day due to not having a recreational coordinator in the community, according to SAO, Memory Murefu.

He said although he reached out to the Tłı̨chǫ Government for help to put on festivities,  he has yet to hear back.

The community of Wekweètì is hosting its festivities at the hockey rink at 1 p.m.

A mini hand game ceremony, canoe race and barbecue will be taking place.

The event is hosted by the Tłı̨chǫ Government.