The Tłı̨chǫ community elections saw two women elected as chiefs of their community for the first time.

The official results for all four community elections were released Wednesday morning.

Football was declared the winner of the election with 46 votes, defeating former Chief Charlie Football who had 12 votes.

“I am so excited, I’m so happy,” Football said.

Going forward she hopes to unify the community, working with the youth and Elders alike.

“The first thing I would really love to do is to get the community to work together and to collect some information, some recommendations,” she explains.

Football specifically mentioned the lack of employment in the community.

“I would really love to work on that,” she says of creating more opportunities.

Football’s father Joseph Judas is a former chief of the community.

“I learned a lot from him, because he had worked with a lot of our Elders within the whole Tłı̨chǫ region, and has been working on land claims and negotiating self-government,” Football said.

“I’m so happy about it, and it was a really good turnout,” he says. “We’re all working together, the Elders and the leaders and the councillors and our former chief.”

Judas adds, Football’s numerous years of working for the Tłı̨chǫ Government make her prepared for the position.

Doreen Arrowmaker won the election with 79 votes, defeating Frank Arrowmaker who had 72 votes.

Arrowmaker says she is wasting no time in getting to work, as she has already looked into programs and organizations to establish more infrastructure in her community.

“I’ve been appointed as an advisory committee member for a fund agency called New Horizon Fund Infrastructure. So I’m going to be closely working with them to see what they can help me with,” she explains.

Arrowmaker also thanked the previous community government for their service to the citizens. 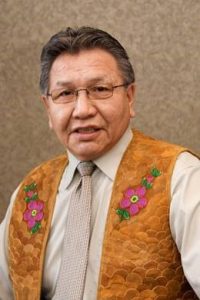 Chief Alfonz Nitsiza was re-elected for his fourth term with 130 votes.

He defeated Mary Ann Jeremick’ca who had 49 votes and Joseph Moosenose who had 70 votes.

Nitsiza says he looks forward to working with the new chiefs.

“I think they are committed and they have a good education. And I always say that education is very important in the role of chief,” he says.

With the Tłı̨chǫ Highway opening in the fall, he says it is an exciting time in Whatì, but there will be risks that come with the road.

“People are happy to see some visitors, relatives from other communities,” Nitsiza says. “At the same time, there’s some worries about lot’s of the people and drugs and alcohol flowing to the community.”

He says one goal is to establish a treatment centre for the region.