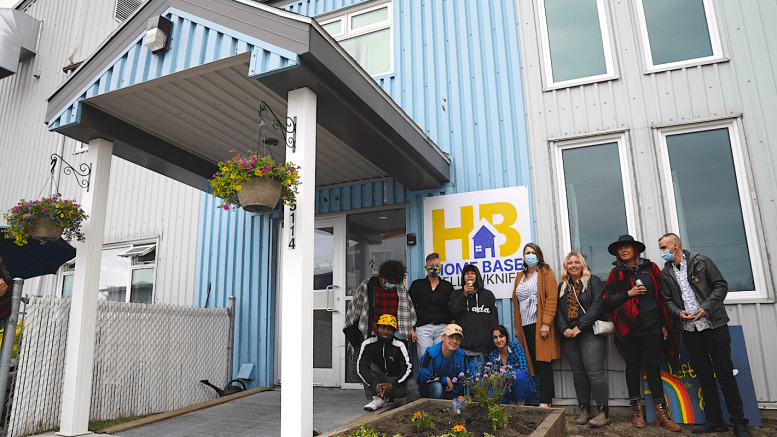 Staff and youth outside the unveiling of the new organization name. (Mariah Caruso/CKLB)

What was once known as the SideDoor is now Home Base Yellowknife to pair with its new mission statement, “No youth left out.”. 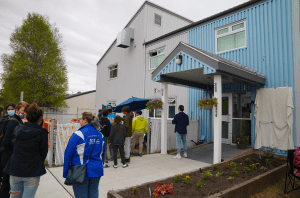 The Hope’s Haven building will now be called Home Base and the Resource Centre at the Mine Rescue building will be renamed the Youth Centre.

These changes give a greater focus on youth services to provide housing and support to youth (ages 12-24) in Yellowknife, in addition to a revamped website and social media.

This transition comes after a change in management late last year – but for youth like Thomas Paradis, he’s just grateful these services exist.

“I have nothing to do, I have nowhere to go and I need social services to survive,” he says.

Paradis is 20-years old and was born in Haiti, but grew up in Quebec after being adopted. He moved to Yellowknife in 2019. At the time, he says a friend offered him the escape he was looking for. 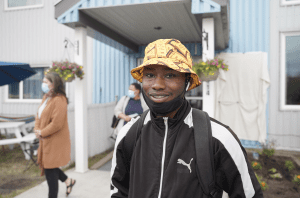 Paradis said thanks to services offered at the SideDoor he’s been able to get back on his feet and appreciate all he has. (Mariah Caruso/CKLB)

Shortly after arriving in Yellowknife, Paradis said he and his friend ended up in jail for a petty crime, which ultimately ended their friendship.

That was the only person Paradis knew in the North, but thanks to organizations like Home Base YK, he was able to keep pushing forward and find a support system.

Overall, Paradis says his time in Yellowknife has been a positive one and that he’s happy here.

He frequents Home Base every day and sometimes helps watch the younger children. Paradis said Home Base helped him be more confident and comfortable around people. It has also opened his eyes to see the way at-risk youth are treated in the community. 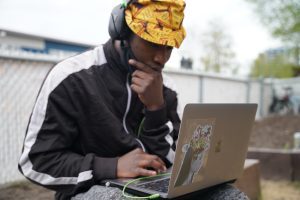 Paradis has a passion for music and he hopes to study sound production in the Fall. (Mariah Caruso/CKLB)

He wants the territorial government to invest in youth by offering more support to these programs.

Since being a part of the organization, Paradis has been able to rent his first apartment and get a part-time job.

In the future, Paradis is looking forward to going back to school in the new year to become a music producer or sound engineer.

He encourages youth to reach out and ask for help.

“They’re here for you and they will help you.”

Anne-Marie Byzuk is the lead program coordinator for the Youth Centre.

On average about 15 to 20 at-risk youth come through those doors daily, she says.

In her experience, most youth struggle with mental health issues and a lack of family support and “when they hit rock bottom, they tend to go and lean towards the drugs and alcohol.”

“At the end of the day, they’re still children,” she says, and they need help.

With services like the Youth Centre, they have a safe space just to be. 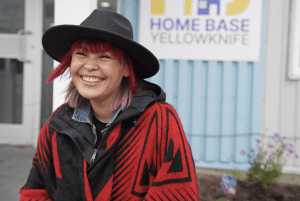 Anne-Marie Byzuk has been working with the organization for about eight months and is excited to see where this new direction takes them. (Mariah Caruso/CKLB)

“I have a lot of kids that just come in and listen to music and talk with their friends,” she says.

The Youth Centre is equipped with free Wi-Fi, computers, printers and paint, to keep the kids entertained and give them the resources they need to succeed.

The organization also severed its relationship with the Christian ministry to be more inclusive to all youth.

“We try and provide them with structure and stability, as well as meeting their needs when it comes to shelter and food,” she says.

“I’m all about being flexible and working towards what’s best for each individual, unique youth,” says Roberts.

Roberts and Byzuk are also now working to open Home Base seven days a week as opposed to the current Tuesday to Saturday.