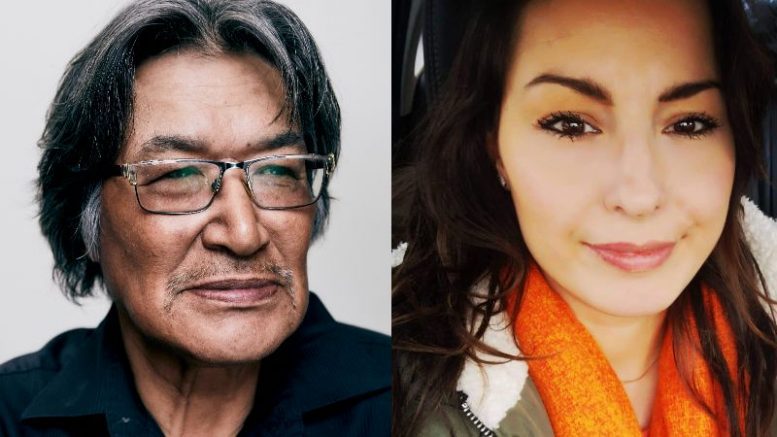 Zacharias Kunuk and Katłįà Lafferty talk on the importance of representation in a world that doesn't recognize Indigenous experiences, voices and stories.

Indigenous storytellers are being recognized for their distinct contributions to Canadian literature.

Among the nominees for the Indigenous Voices Awards are Lisa Boivinis from Fort Resolution, Katłįà Lafferty from Yellowknife and Zacharias Kunuk from Iglulik, Nunavut.

Lafferty and Kunuk talk of the importance of representation in a world that doesn’t recognize Indigenous experiences, voices and stories.

“I wasn’t expecting anything,” said Kunuk.

Kunuk is a 63-year-old, award-winning Inuit filmmaker, writer and he believes ” the system is not (built) for the Aboriginal people of Canada.”

He speaks on the structural systems at play within certain artistic societies.

“In our culture storytelling is not written in books,” he says, ” (Now) we have to remember everything we do and we have to write.”

In an effort to preserve those stories he took it upon himself to write them down.

He says he was afraid one day his grandchildren would ask about particular teachings and it would get muddled by a colonial lens.

“We have to create our own library for our children. Now is the time to collect all these stories and put them in the book,” says Kunuk.

Kunuk’s book The Shamans Apprentice is nominated for an IVA in the Published Work in an Indigenous Language category.

The book tells the story of a female protagonist on her hero journey as she embarks on her mission to an underground world to find answers for her community.

Northern writers can do it too

“I was very happy and just felt that my work is finally receiving some acknowledgement,” says Katłįà Lafferty after learning she’d been nominated in the Published Prose in English: Fiction category.

Lafferty says things are changing in regards to the way Indigenous people and their content are being revered.

“Our stories need to be heard,” she says.

Lafferty argues that Indigenous peoples, especially from remote communities, don’t get the same attention as the bigger cities like Toronto and Vancouver.

“Because the North has often been left out of the rest of Canada. And it’s, for some reason, almost forgotten.”

Lafferty encourages residents in her community to seek help and find a mentor along their journey.

“That’s what I did. And I don’t regret it at all, I had to ask for help. And then the doors opened,” she says.

Moreover, Lafferty is committed to educating people across the country on northern issues and sharing her side of history.

“It’s important to set that into history and rewrite history, rewrite the words on the page that were wrong, and written, very one-sided from that settler point of view.”

Being a writer, she says, has given her newfound confidence and purpose as an Indigenous woman.

“My purpose is to share stories that matter and that are exposing injustices,” she says, “to be able to talk about these things so that we can make social change.”

Lafferty has plans to turn her novel into a graphic novel in the coming years.

The Indigenous Voices Awards (IVA) was set in 2017 “to support and nurture the work” of emerging Indigenous artists on lands claimed by Canada, according to IVA’s website.

Award recipients will be announced on National Indigenous Peoples Day, June 21, in a virtual gala.