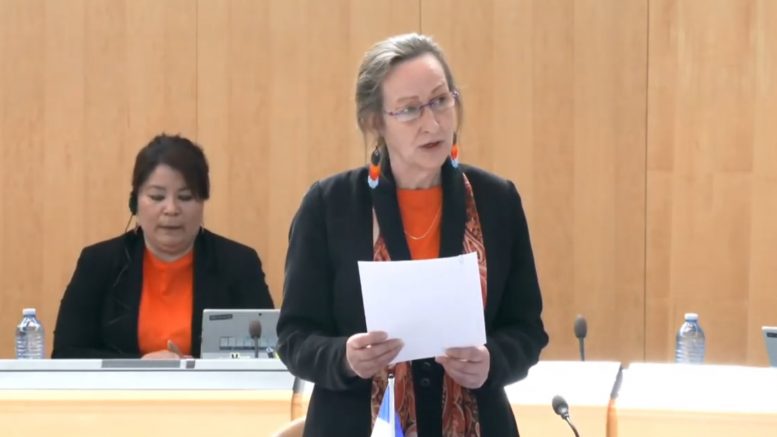 Many MLAs, ministers and Premier Caroline Cochrane expressed their disappointment and sadness in the recent discovery of Indigenous children’s remains at a former residential school site in Kamloops, B.C. Monday.

Lisa Semmler, MLA for Inuvik Twin Lakes, said it was insulting that using the term genocide was ever debated.

“Genocide is defined as a deliberate and systemic destruction of a group of people because of their ethnicity, nationality, religion or race,” she said.

“I don’t know what else this policy could be considered as. But, we are still here today. We are strong and resilient and we will remain here in our home on our land and continue to combat racism to teach those who are unaware of our history, so that this is never forgotten, and never repeated. May God rest their little souls.”

Premier Cochrane, through questioning by Great Slave MLA Katrina Nokleby, committed to bringing forward a proposal to Indigenous governments to assist them in research projects to document and protect residential school cemeteries, and unmarked burial locations.

She said her first instinct was to investigate possible residential school grave sites in the territory, but this initiative would have to be led by Indigenous governments themselves.

“The Truth and Reconciliation Commission of Canada … under their section on missing children and burial information, which is the action 72 to 76, it talks about the development of strategies and research projects to document and protect residential school cemeteries and unmarked burial locations,” Cochrane said.

“The Aboriginal community most affected shall lead the development of such strategies.

“My commitment is that I shall bring it forward at our multilateral table, and take the guidance of the Indigenous governments of the NWT.”

Nokleby asked if Cochrane and her government would commit to acquiring ground penetrating radar to assist in the search.

“Absolutely,” Cochrane said, noting that the Truth and Reconciliation Commission stipulates “Aboriginal protocols shall be respected before any potentially invasive technical inspection and investigation of a cemetery site.”

Cochrane also committed to speaking to the prime minister to fund these operations as the Government of Canada is responsible.

According to Cochrane, the GNWT has been consulting with Indigenous governments on the Implementation of UNDRIP and will meet again on June 11.