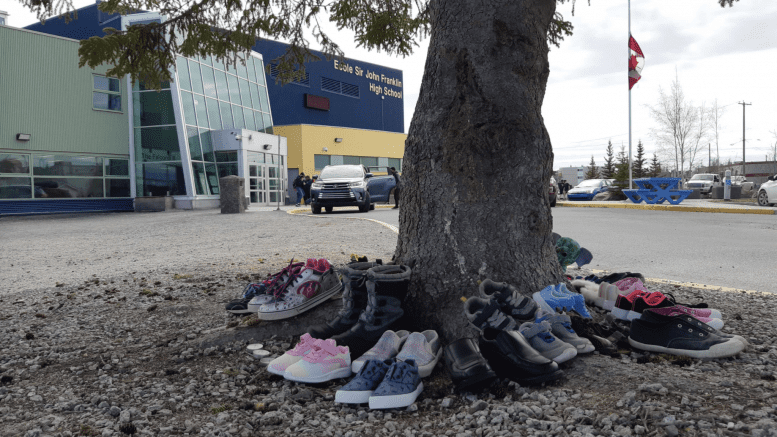 Children's shoes are popping up all over Yellowknife to honour the 215 Indigenous children lost at Kamloops residential school. (Francis Tessier- Burns/ CKLB)

WARNING: This story contains details some readers may find distressing.

The remains of 215 Indigenous children have been found buried on the site of the former Kamloops Indian Residential School in B.C. – a reality that has shaken the nation and echoed across the North.

The Tk’emlúps te Secwépemc First Nation announced the findings on May 27.

‘Angry but not surprised’

David Poitras is the chief for the Salt River First Nation and a survivor of the residential school system in the NWT.

Upon hearing the news, he said he was angry but not surprised.

“I can’t imagine losing my children like that,” he says, “to send them away, and never see them again, I just can’t.”

These recent findings had brought up “repressed memories” for Poitras.

“I just didn’t know how to be a human being anymore,” he says.

“What happens is all the hurt, shame, the fear gets covered up by anger. Because for men anger’s okay. But feeling hurt, shame and fear are not okay.”

Poitras struggled with this experience for many years but feels there is an opportunity for healing and reconciliation here.

Poitras is calling on the federal government to work with Indigenous governments and check out other residential school sites, especially in the North.

“No more denial, face it, it’s a part of our history.”

According to a fact sheet by the department of Education, Culture and Employment, “The Northwest Territories had the highest percentage of students in residential schools of any area in Canada.”

Norman Yakeleya is now the Dene National Chief, but he used to be known as Number 153.

He describes his experience of the residential school system as “dehumanizing.”

“I won’t pretend that there isn’t an overwhelming sense of pain, resentment, sadness, and even dare say hatred,” he says.

“How could a child be turned into a number?”

The truth will set you free, he says, something he remembers from his catholic teachings and asks the catholic church, the federal government and the Queen of England to make this acknowledgment, “to say they’re sorry, but also to back up their words, with true reconciliation.”

Yakeleya pointed to this history as a cause for the many struggles Indigenous people face today.

“It’s not enough for them just to lower their flags.”

Lost but not forgotten

In honour of those lost children, shoes are popping up all over Yellowknife.

A vigil will be held outside École Sir John Franklin High School near Yellowknife’s former residential school, Akaitcho Hall, on Monday at 7 p.m.

Angela Canning is the organizer of the Facebook event and part of the Tthets’ék’ehdélı̨ First Nation.

“I just had to do something to express my grief, it was part of my process of getting over it. And I’m sure there are other people out there that needed to do the same thing,” she says.

More than 100 residents have responded on social media that they will attend the vigil. Many northern communities have lowered their flags to half-mast today and the City of Yellowknife will be doing so for 215 hours to honour every child lost.

The flags at City Hall, the Fire Hall and on Frame Lake Trail will be at half-mast until 8 a.m. on June 9.

The Kamloops residential school operated between 1890 and 1969.

A National Indian Residential School Crisis Line has been set up to provide support for those affected.  The 24-hour national crisis line is at 1-866 925-4419.