Left to right: Rebecca Alty, mayor of Yellowknife, John Hazenberg, director of the Council for the Advancement of Native Development Officers, and Ernest Betsina,

The Yellowknives Dene First Nation’s (YKDFN) and City of Yellowknife took a step towards improving its historically contentious relationship.

On Tuesday at Aurora Village, the city and YKDFN celebrated the completion of the First Nations – Municipal Community Economic Development Initiative (CEDI).

The relationship between the two was a major discussion.

The three communities joined in 2019 and are the first in Canada to complete the two-year accelerated program instead of the usual four years.

Betsina says the objective of the program is simple.

“Our goal is to serve our membership, the best way we can,” he explains, “we can serve our people better by getting help from other people and organizations to help us along the way.” 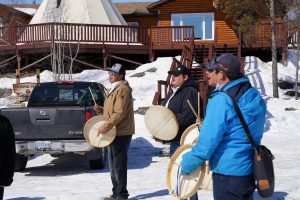 He adds there is one project he hopes the city will help with to further improve the relationship.

“One big project is the Giant Mine because the YKDFN, we can’t do everything,” he says. “The City of Yellowknife, I know that they can help us with that.”

She says COVID-19 has slowed the industry down, but they can still prepare for when visitors are able to return.

“Working on setting up the new Yellowknife Visitor Center, we’ll be working with… The Yellowknives Dene First Nation to get that,” she says.

The event included speeches, a lunch and finished off with YKDFN Drummers.