The first Fort Good Hope farmers market sold out of boxes at its event on April 15. (Photo courtesy of Chris Pereira)

A farmers market held in Fort Good Hope sold out of boxes full of produce in its first event of the season.

The market was held on April 15 in front of the Yamoga Land Corporation building. 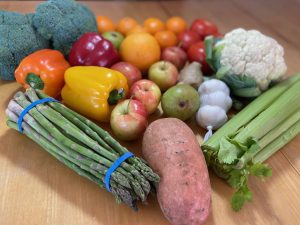 A photo of the produce included in the boxes. (Photo courtesy of Chris Pereira.)

He said the event saw no customers in the first half hour.

“So we were a bit disappointed, we thought, ‘Okay, what are we going to do with these 50 boxes’,” he says.

But in the next half hour, customers showed up in numbers.

Tommy Kakfwi was one of the customers at the market, who says he will continue shopping there each month.

“It’s supporting a good cause… And it’s fresh, something we don’t get that often,” he says.

He says there was actually so much produce available, he ended up sending some to his sister in Colville Lake.

Kakfwi says the variety of fruit and vegetables was what particularly stood out to him and for the low price of $25.

Accessing fresh fruits and vegetables in the community for a reasonable price has been an ongoing challenge.

“We thought a farmers market is the answer for this issue,” Pereira explains.

The project received funding from Crown-Indigenous Relations and Northern Affairs Canada to run a monthly farmers market for the next several months.

The organization has fresh produce shipped up from greenhouses in Yellowknife.

Another partnership was established with Summit Air who is subsidizing the flights containing the fruits and veggies.

Pereira says there are plans for the next market to also have traditional recipes in the boxes that can incorporate fresh produce.

Going forward, Pereira says the organization is looking for more partners and funds for the future events. The program is a trial run and will need support to continue past the next six or seven months.

‘I’m asking people to be safe and to take this seriously, because it’s real’