A pan-Northern entrepreneurial project called EntrepreNorth has highlighted a growing business run by a man from Fort Providence.

EntrepreNorth is Northern-based project that works with Indigenous and community-based entrepreneurs across the three territories, said community manager Xina Cowan.

“Our mission is empowering these entrepreneurs to build sustainable businesses and livelihoods across Northern Canada.”

The project hosts various cohort programming in collaboration with Indigenous communities and governments to connect with young people between 18 and 35 to develop their business ideas.

Part of that program includes community ideation workshops – two-day events where budding entrepreneurs get help fleshing out pitching their ideas. Part of the workshops also include a pitch contest.

Bradley Thom of Fort Providence recently won a pitch contest held in a workshop run in collaboration with the Dehcho First Nations for his business Green Tree Recycling and Holdings. Thom took home $250, a six-month Shopify subscription and received a social media shout-out.

“(EntrepreNorth) is a great team of people, they’re amazing,” he said. “I’m very grateful for what they’ve taught me.” 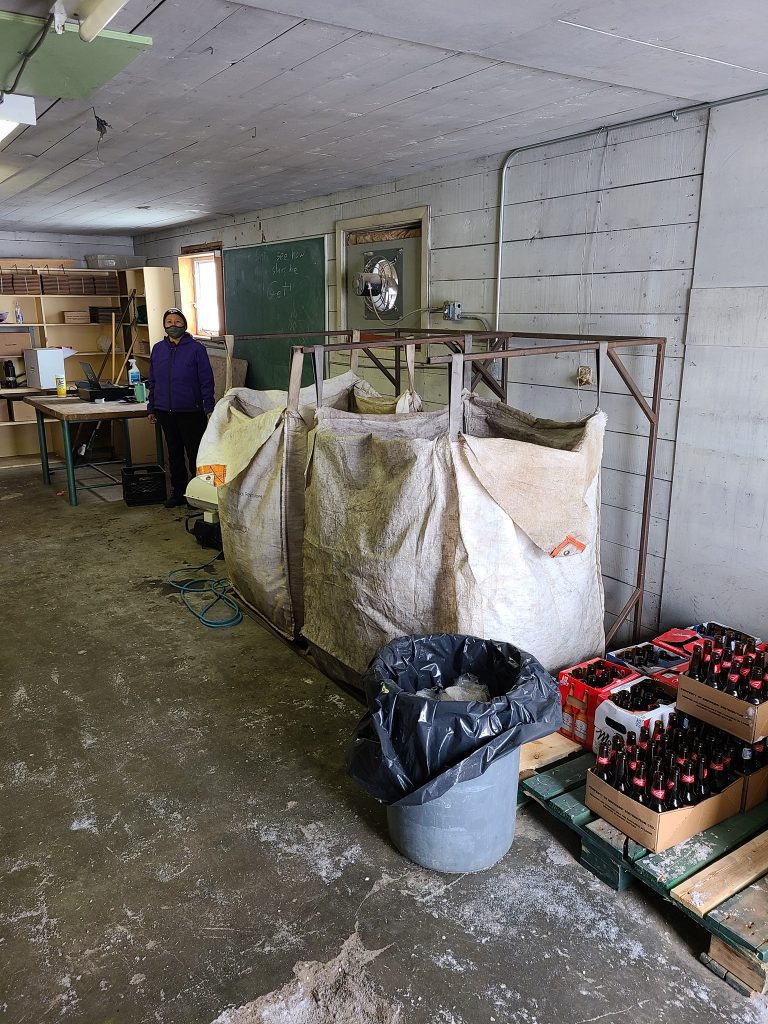 Thom hopes to replace the current recycling shed his company uses because it is made with harmful asbestos.
(EntrepreNorth photo)

Thom has been running the recycling in the community. He actively collects and sorts it and ensures it reaches the regional recycling centre in Hay River so it can be processed elsewhere.

Thom developed his ideas for expanding recycling in his community while attending school in the south.

“I went to school at the University of Victoria and British Columbia and I learned a lot about their recycling program when it came to composting, recycling plastics and glass,” Thom said.

“I made my own compost at home and saw it as a way to get my foot in the door for a larger recycling and waste diversion program in the community.”

Thom said this business is important to him because he wants Fort Providence to be more resilient and adaptable as the North faces unprecedented challenges posed by climate change.

“Basically, I want this business to be used as a tool to help my community become more resilient and independent with smart and sustainable infrastructure investments to help prepare us for the future,” he said.

Thom also said he wants to help bolster food security in the community through an active composting program.

Cowan said she and her team were very impressed with what Thom presented during their ideation workshop, which is usually geared towards developing confidence in participants.

“Just being with him for those two days you can just sense it brings him a lot of joy to be of service to his community and to create a business that’s helping the land and the people to be well,” she said.

In winning his social media shout-out, Thom said he was inspired to seize the opportunity and started a small fundraising campaign with GoFundMe for something his business needs – replacing the asbestos-laden shed where he and his team works.

“The guy who did recycling previously didn’t even use the shed in the summer and that was likely because of the asbestos,” Thom said.

“I thought this might actually be a great opportunity to get me and my team a whole new asbestos-free shed because it’s been like that for years.”

Thom and his team of two have already raised $1,700 towards his goal, which he said is “way more than he thought he would raise.”

“I know that one day I want to get a lot and a shop that we can store our stuff in but also to get larger recycling dumpsters in the community,” Thom said.

Since the post, he said he has people from all over the territory and Alberta reaching out to him and offering advice and asking how they can help expand his efforts.

Now, Thom is working to apply to territorial grants to raise more funds so the shed can be replaced by next winter.