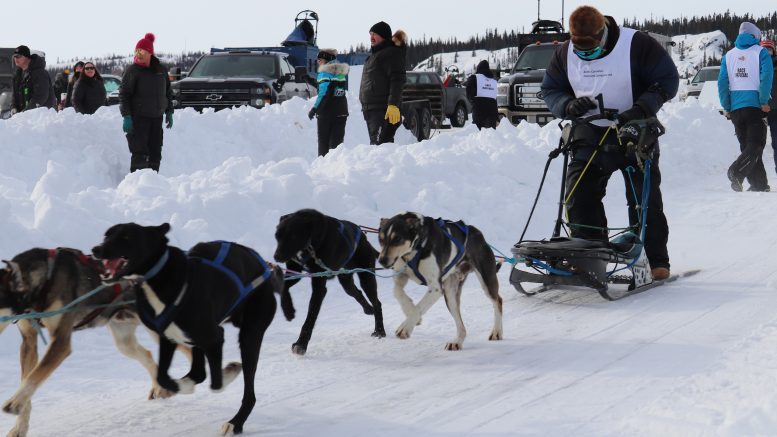 Richard Beck takes off from the starting chute on day 3 of the Canadian Championship Dog Derby. (Luke Carroll/ CKLB)

After taking a hiatus from dog mushing, Grant Beck returned to the sport in time to win the Canadian Championship Dog Derby.

And he wasn’t the only Beck to end up on the podium — his brother Richard came second, and nephew Brent took third.

Beck used to race around the world, but got busy running Beck’s Sled Dog Kennels & Tours until getting back into racing this year.

“The enthusiasm for racing in the territories was just super this year, it’s a lot of fun,” he says.

He says the warm but windy weather was perfect for the mushers.

“It was a lot of strategy involved today amongst the top mushers,” Beck explained, “It’s always windy in Yellowknife… Everybody’s always aware of that wind coming from the North.”

Beck completed the 150 mile 10-dog race in a time of eight hours and 54 minutes.

But shortly after the win, he wasted no time in crediting his fellow competitors, including one of his staff Yumi Kuromasa.

Kuromasa is new to the sport as she began racing about a year ago.

“This morning I was a little bit nervous… But once I got on the run with the dogs it was a beautiful day, a beautiful trail, I felt really good,” she said.

Kuromasa finished in seventh place with a time of nine hours and 39 minutes.

Beck says his return to the sport, along with Kuromasa’s newfound enjoyment means he will need to make some changes to his business.

“She loves it so much, now that we’re both running the race we’re going to have to adjust the business when the tours come back to figure out how we can do both,” Beck says with a laugh.

The three-day race which launched from Yellowknife Bay began on Friday and finished Sunday.

Dozens of spectators were out to watch the various events throughout the weekend.

This includes Eli Nasogaluak, a local artist, who says he enjoyed taking advantage of the weather to watch the races.

“It’s good to see all the excitement about the race,” he says.

On Sunday, children had the opportunity to participate in a two-dog race and amateur adults got to try their hand at dog mushing in the eight-mile Mad Trapper Race.