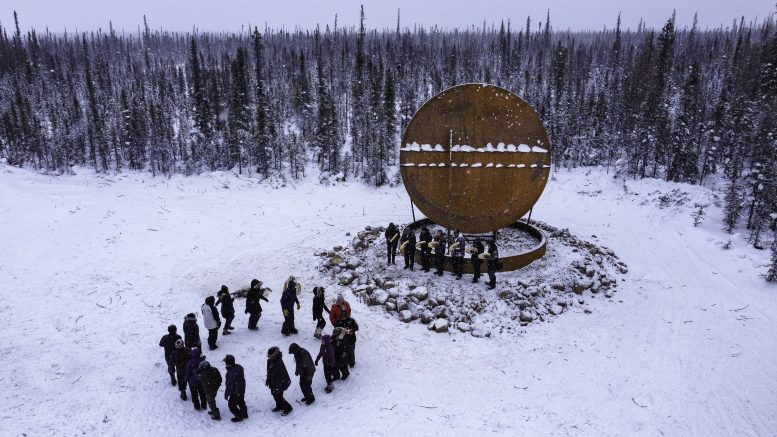 Residents of Fort Good Hope have a drum dance to celebrate the new Arctic Circle Drum monument on March 15. (Photo courtesy of the Department of Industry, Tourism and Investment)

The Northwest Territories’ latest tourism attraction has been unveiled outside of Fort Good Hope.

During a ceremony Monday afternoon, members of the community gathered in a ribbon cutting ceremony for one of the largest drums in Canada, if not the world.

“The community was excited,” Edgi-Manuel said.

“We had about 40 people that came out. We had the drummers up there and they opened with a prayer song.”

She said there were presentations from leaders and even a drum dance to celebrate the monument.

The giant drum made of corten steel and coated with rusty patina sits 37 kilometres outside of Fort Good Hope at over 19 feet tall and wide. 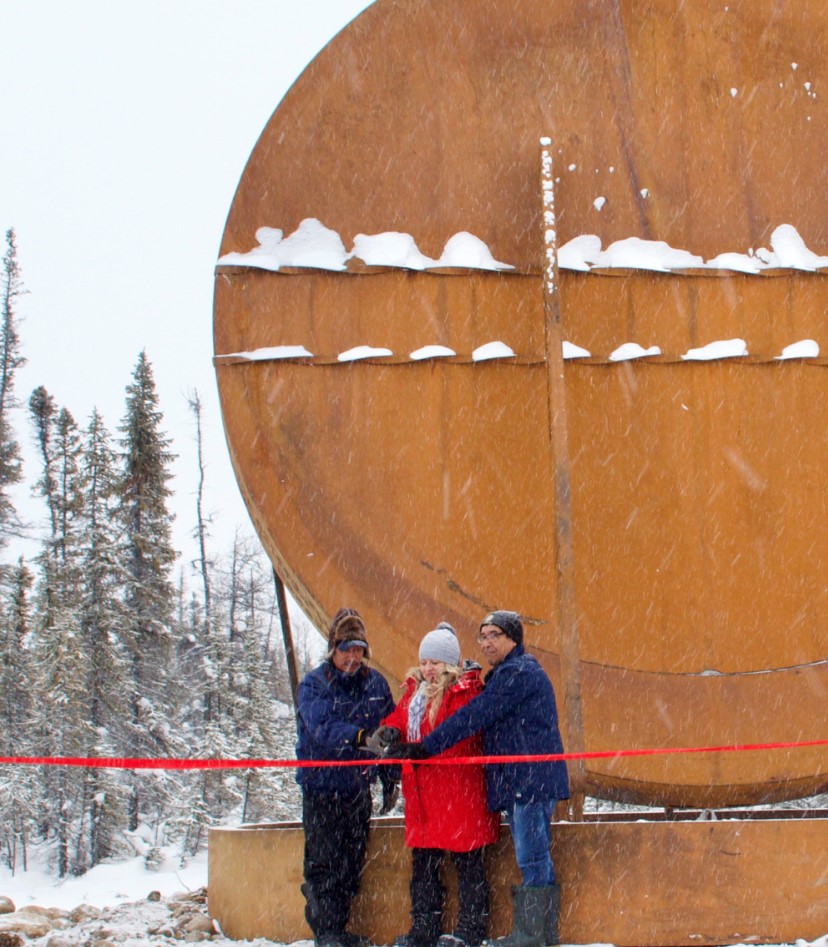 The drum is a signpost for where the Arctic Circle intersects the winter road between Fort Good Hope and Colville Lake, and acts as a tourist attraction for travellers.

“On the drum stick it says ‘K’asho Got’ine Néné’, which is our people’s names and it means ‘land.’ So, it’s in our land area,” Edgi-Manuel said.

The sign’s location is also the only place in the NWT where travellers can access the Arctic Circle by winter road or river.

The design of the monument holds special significance to the community. It is based on drums given to two of Edgi-Manuel’s grandsons.

Yellowknife-based company Inkit was commissioned to design and manufacture the sign.

Edgi-Manuel said the project – with investment from the Department of Industry, Tourism and Investment (ITI) and the community – cost over $100,000.

A tourism attraction years in the making

In the 1990s, ITI partnered with Fort Good Hope to erect an Arctic Circle sign for paddlers on the Mackenzie River. After a few years the sign was taken  down due to erosion along the river bank.

It wasn’t until 2019 that ITI hosted a tourism conference in Fort Good Hope and the idea of an Arctic Circle sign reemerged in discussion with local leadership.

In February of 2020, the newly-elected Chief Danny Masazumi, Edwin Erutse, president of the Yamoga Land Corporation, and other leaders met with GNWT representatives and decided to go ahead with the project.

Later in the fall the territorial government announced Growth and Recovery by Investing in Tourism (GRIT) funding. The community submitted a proposal and were successful.

Kacee Hunter, manager of parks and tourism for ITI’s Sahtú regional office, said the drum is important to the community because it is moving towards tourism as an economic driver.

“The hope is that the monument will be one of the drivers to help bring tourists in,” he said.

Hunter said there is a lot of potential for tourism in the Sahtú, as it is so isolated and like a “well-kept secret” in the NWT. He said he hopes this monument and the development of new campgrounds in the region will spur an influx of tourists.

“Every community is at their own stage in terms of being prepared for tourists,” Hunter said.

Hunter said ITI will continue to work with communities and listen to their needs as they prepare to diversify their local economy.

Seven years for McNeely in stabbing death of Lloyd Edgi

‘We haven’t heard from anyone in two months’: LKDFN Chief discusses Frontier Lodge