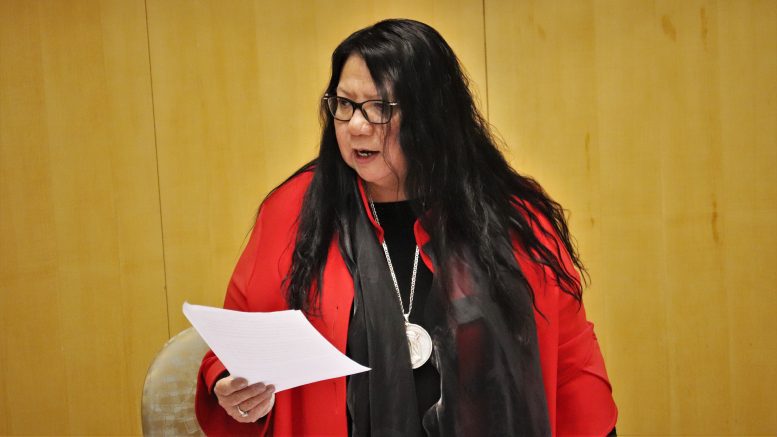 Regular MLAs voted unanimously in favour of a motion calling for the territorial government to “review its policies and practices for racial and cultural bias, especially as they relate to education, health and social services, justice, housing, and government hiring.”

Frieda Martselos, MLA for Thebacha, introduced the motion during Wednesday’s Legislative Assembly sitting, which was focused on the issue of systemic racism.

“Change must come from the top. Change must be felt from the bottom. Only then, we have made a difference,” said Martselos. “Racism takes many different forms, especially in government. Gaps in cultural barriers have always been a problem.”

Deh Cho MLA Ron Bonnetrouge seconded the motion, and said, “For too long, we’ve had lots of racist overtones happening to our people.”

Earlier in the sitting, Bonnetrouge said systemic racism can be present in places like “schools, stores, hockey rinks, even offices and other places we thought would care for our people.”

He added, “Indigenous peoples are treated as second-class citizens in their own communities and on their own homeland. It contributes to the unjust, economic, and resource inequalities as seen for centuries and is still alive today. We are not to thrive but kept at bay with promises and more promises of a better tomorrow.”

Lesa Semmler, MLA for Inuvik Twin Lakes, called on all residents to make the territory safer and for GNWT policies to “reflect that so that we all make sure that we all have access to education, the justice system, our child welfare.”

“We have all these nice well-worded documents but at the heart of it all is actions,” he said. “I am hoping that all of us, all my colleagues, work really hard and back up our words with actions.”

“However, cabinet fully supports the principles behind this motion,” he added.

In presenting the motion, Martselos pointed to the fact the territorial government has accepted recommendations from the Truth and Reconciliation Commissioner,the principles of the United Nations Declaration on the Rights of Indigenous Peoples, and the calls for justice of the Nation Inquiry into Missing and Murdered Indigneous Women and Girls.

During Wednesday’s sitting, Caroline Wawzonek, minister responsible for the status of women, revealed the NWT government’s draft action plan responding to the MMIWG inquiry would be delayed.

She has previously told CKLB a draft of the plan would be ready for May of this year.

Yesterday, she told MLAs it would not be ready until October.

She said the delay was because she wanted the plan to respect principles outlined in the inquiry — mainly that it be de-colonized, and that it include feedback from the families of victims and survivors.

Wawzonek did not explain why this was not the original intent in drafting the action plan.

The inquiry released its findings in June of 2019 and outlined 231 Calls to Action to address violence against Indigneous women, girls and two-spirit people.

Wawzonek said that implementing the Calls to Action could cost millions, if not billions of dollars.

She added that implementation costs would not be part of the draft plan to come in October.