The Legislative Assembly’s Board of Management has hired Quintet Consulting Corp. to do the third-party assessment into the Office of the Clerk.

“Quintet’s consulting work focuses on investigations into alleged harassment and misconduct, organization reviews, workplace policy development, and training,” reads a media statement from the board. “The company has completed more than 1,000 engagements in Canada and across the globe.”

One of those was the review into complaints of bullying and harassment against Payette, which ended with her resigning from the role of Governor General.

Tim Mercer is currently facing similar complaints from April Taylor, a staff member in his office, and MLA Steve Norn, as well as another complaint about possible misconduct from Nicole Latour, the chief electoral officer.

The terms of reference of the review limit the assessment to the beginning of the 19th Assembly.

“Current and former staff of the Office of the Clerk, since the beginning of the 19th Assembly, will have the opportunity to speak voluntarily to the independent third-party firm,” reads the statement.

A spokesperson for the Legislative Assembly says the terms were reviewed by Quintet Consulting before being finalized.

Asked why the scope was limited to this assembly, a spokesperson said, “The Board of Management is responsible for  the 19th Legislative Assembly, and the allegations raised is that the Office of the Clerk is currently a toxic work environment. In the 18th Assembly, a number of actions were taken by the Board in respect to concerns raised at that time and those matters were resolved during the 18th Assembly. The scope of this workplace review is broader than what is normally provided in that former employees will be asked and encouraged to participate. The scope of the investigation into the individual written complaints is not limited to the 19th Assembly.”

They added that “relevant information” around previous investigations into Mercer’s conduct has also been shared with Quintet Consulting.

Speaker Frederick Blake Jr. is the chair of the Board of Management. CBC has previously reported on Blake’s friendship with Mercer outside of work.

CKLB asked whether this relationship constituted a conflict of interest for the Speaker when deciding how to address complaints against the clerk. 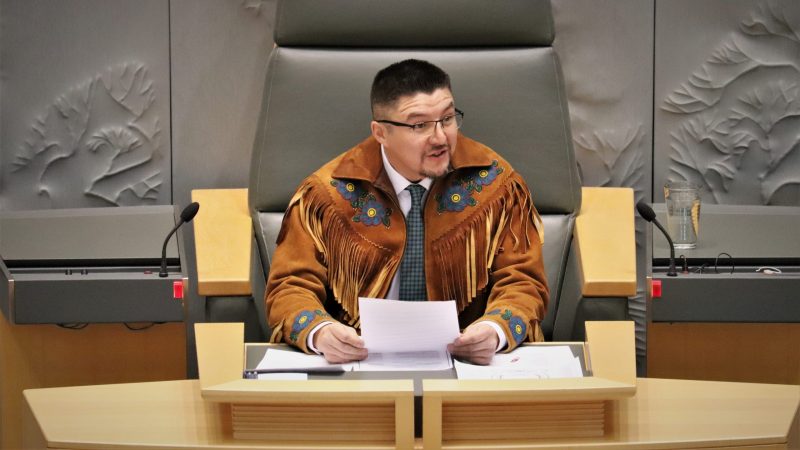 Frederick Blake Jr. is the Speaker of the Legislative Assembly. (File photo/CKLB)

Blake referred to Section 74 of the Legislative Assembly and Executive Council Act, which defines conflict of interest. Blake essentially said his relationship did not create a conflict because he would not benefit financially from his relationship with the clerk.

However, the section does not specify a person must benefit financially for it to be considered a conflict, only that the person “knows or reasonably should know that the performance of the duty or function… may further the member’s private interests…”

Blake added, “These provisions also apply in relation to the Code of Conduct. It states that Members must carry out their official duties objectively and without consideration of personal or financial interests, and must arrange their personal affairs so as to maintain the trust and confidence of the public. As Chair of the Board of Management, I am responsible for administering the direction of the Board, and I will make decisions on this matter objectively and without consideration of personal interests.”

Former MLA Kieron Testart took to social media to criticize Blake’s role in the process and the terms of reference.

“The investigation is being led by Speaker Blake, despite the fact that has a direct personal conflict due to his close friendship with the Clerk of the Legislative Assembly,” wrote Testart. “Blake has not recused himself and plays an active role in all the decisions being made with is a serious ethical lapse that doesn’t seem to bother any of his colleagues on the Board of Management.”

Mercer has been on leave from the Legislative Assembly since Feb. 15.