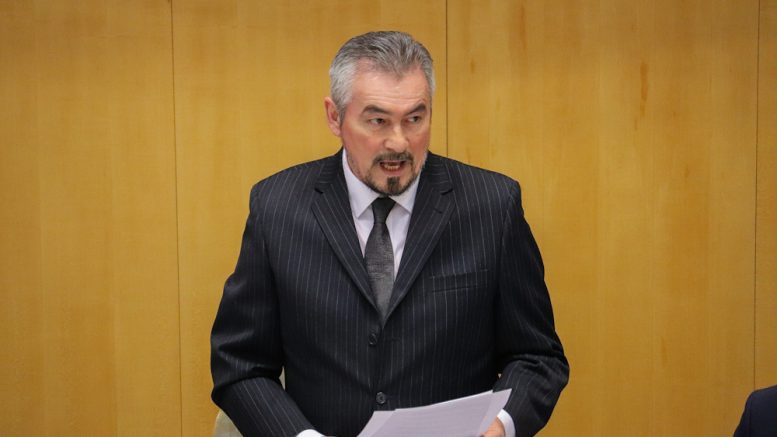 Ron Bonnetrouge is the MLA for Deh Cho. (File photo/CKLB).

On Tuesday, he said elders — especially in small communities — were facing a “pandemic” of abuse.

“Elder abuse is a real and frightening problem in our territory,” said Julie Green, minister responsible for Seniors. She added that simply putting money towards the problem, though, would not be enough to solve it.

“It is a set of attitudes that people have towards elders, in which they are neglected and exploited,” she said.

Elder abuse can be a single action, multiple actions or even inaction that cause an older person distress and harm. That ranges from financial and/or physical abuse to instances of neglect.

Bonnetrouge gave the example of an elder with mobility issues sharing their banking information with someone they trust, only to have that person make purchases for themselves; or when a family member that’s caring for an elderly parent then drops them off at a friend’s and leaves for days at a time.

Both Bonnetrouge and Green acknowledged the NWT Seniors’ Society hosted a workshop on the issue in Fort Providence last fall. However, Bonnetrouge said the organization could have done more to reach out to seniors directly and speak with them.

Green said the society is now working on a plan to directly address elder abuse in the community and that it will be reviewed by seniors there once complete.

Bonnetrouge also asked for an official elders advocate and interpreter to travel to small communities to speak with elders facing abuse, rather than rely on the workshops.

“Elder abuse is like intimate partner violence in that the victims are often shamed, not willing to come forward to say that they have been taken advantage of,” said Green.

Without committing to a new position, she added that health staff are being trained to detect signs of abuse and to support seniors to access support services if they are victims.

Bonnetrouge responded saying that some elders in his community have been refused services by social services because “they are dealing mostly with child and family services … they refused to help in any regard.”

Green said she was “shocked” to hear that and said she’d be following up to know what other services are available in the community.

The minister also said the NWT government was “having discussions” on how it could enforce consequences related to elder abuse and that it was in the early stages of looking at other jurisdictions to see if there needed to be any legislation changes to try and prevent elder abuse.

You can contact the NWT Seniors’ Society to set up a workshop in your community.